Dutrow Fills Void With I Spent It 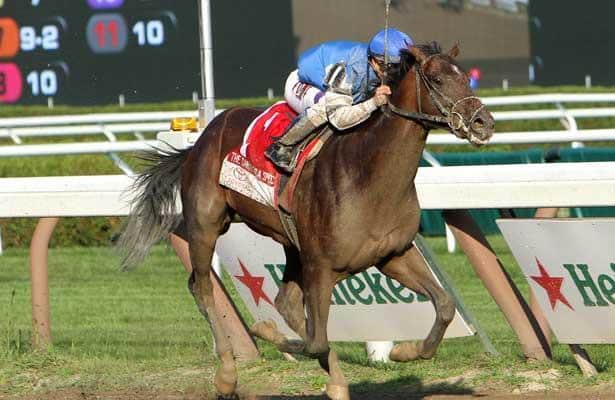 Less than a week ago, trainer Tony Dutrow was dealing with the loss of Big Trouble, promising winner of the Grade 2 Sanford on July 19, whose season ended with a torn suspensory ligament.

Helping to fill the void is another up-and-coming 2-year-old in I Spent It, who showed guts, maturity, and talent in taking the Grade 2 Toyota Saratoga Special on Sunday.

"Trouble still hurts. He's such a nice horse, and such a nice horse to be around. He's our good friend," Dutrow said. "To be fortunate enough to have another one like I Spent It, we're just so blessed. We feel fortunate to be standing here today with a horse like that under our care."

In just his second start, I Spent It tracked strong early fractions set by Nonna's Boy, and responded when roused by jockey Javier Castellano to spurt through a narrow opening between the rail and the tiring pacesetter in mid-stretch to win by 2 ¾ lengths in 1:16.79 for  6 ½ furlongs.

"First of all, I was very happy with how the horse was in the gate because we had been working with him," Dutrow said. "He got away from there and it was obvious the horse had plenty of run in him and he was in a good position. At the top of the stretch I'm still not worried about anything because I know we've got lots of horse and just need a place to go. I was very confident in Javier. When I saw the rail, I knew it was tight, but I didn't know how tight without seeing the head-on. I was never really worried about any of it. I could see that he had plenty of horse and just needed a place to go."

Though he had been high on the horse, Dutrow was even more wowed by I Spent It's performance after watching the race replay several times.

"I had tried to be professional for the last couple months about this boy, but all of us around here that are working with him all felt really confident in him," he said. "I really wanted to tell everybody what a really good horse this is. None of what happened yesterday surprised any of us.

"When I saw the head-on, I was very impressed with how a horse with only one [previous] race could show the professionalism to go through such a small hole. There wasn't much room there. That was the most impressive thing, just how impressive the horse was to be comfortable, listen to his rider and when pointed, responded."

Dutrow did not rule out bringing Alex and JoAnn Lieblong's I Spent It back in the Grade 1, $350,000 Hopeful on closing day, September 1.

"I haven't discussed it with Mr. Lieblong and his wife. I really wouldn't have any advice to give them right now," he said. "I'd want to watch the horse to see what effect that race took on our horse, but right now [the Hopeful] would be a consideration. He seems excellent. There's no doubt we've got a pretty promising horse on our hands."