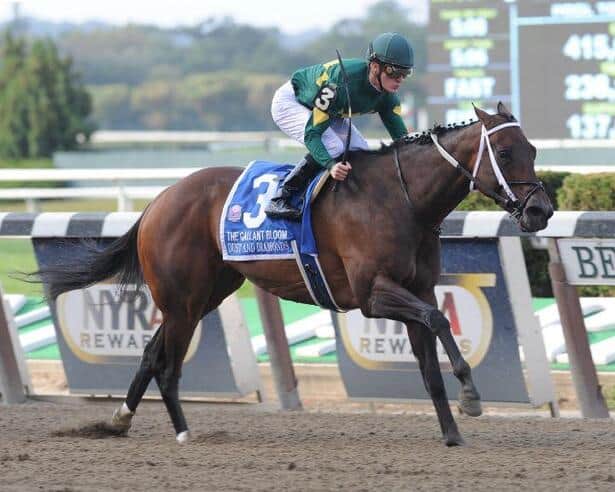 The daughter of Vindication was bred and raced by Padua Stable and trained by Steve Asmussen through the Breeders’ Cup, and sold two days later for $900,000 to Brazil-based Stud TNT. She is now in the care of perennial Gulfstream leading trainer Todd Pletcher with jockey John Velazquez to ride Saturday in the six-furlong Sugar Swirl facing six rival fillies and mares.

A winner of five of 10 starts and never off the board, Dust and Diamonds was well-backed going into the seven-furlong Filly and Mare Sprint after winning her three previous starts, most notably the Gallant Bloom Handicap (G2) at Belmont Park on Sept. 22.

“After the Acorn we decided she needed to freshen up and she came back with the two good races,” said Catalano of Sacristy. “I still think she’ll go up to a mile. She seems to handle any surface and had a couple of good works since we got here. We’ll take a look at the race and see if we run Honey Chile or look for an allowance race.” Honey Chile is a daughter of Invisible Ink that started here three times last winter, winning an allowance race in December, finishing second in the Sunshine Millions Filly & Mare Sprint in January and third in the Lady’s Turf Sprint in early March. A two-time allowance winner at Arlington Park, Honey Chile hasn’t been out since checking in seventh in the Ontario Fashion Stakes (G3) at Woodbine on Nov. 4.

“I’m most likely going to run only two,” said Wolfson. “I’ll look at the race and see how it shapes up. Nakano is a closer and the other two are speed. Spectacular Sky might be the class. I really like her, but I think she likes 6 ½ or seven furlongs better. Golden Mystery likes the six furlongs.”

A daughter of Sky Mesa, Spectacular Sky won three straight sprints at Calder this summer, including two minor stakes. She will bid to bounce back from a sixth-place finish in her last start when trying a mile at Churchill Downs in the Chilukki Stakes (G2) on Nov. 3 after setting the pace for a half-mile in the one-turn race. A chestnut daughter of Awesome Again, Golden Mystery finished a game second to 2011 Eclipse champion filly Musical Romance in the Mike Sherman Memorial at Calder in early October with Nakano third. Golden Mystery came back against colts in the Jack Dudley Sprint at Calder on Nov. 10 and finished a respectable fourth.

Finally, James Spence’s 3-year-old filly Hearts of Red completes the field with jockey Robby Albarado in the saddle for trainer Ralph Nicks. The Kentucky homebred daughter of Lion Heart just missed when second by a half-length last out in the Dream Supreme Stakes at Belmont Park on Oct. 7 after a sharp allowance score at Saratoga in late August.