Brown assigns Dunbar Road a Grade 1 target off the layoff 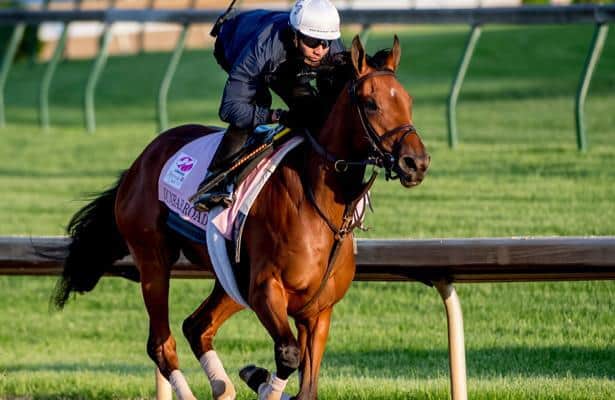 Grade 1-winning filly Dunbar Road will seek another high-level victory in her season debut if all goes according to plan.

Alabama winner DUNBAR ROAD had her second workout of the year today and looked fabulous! I’m pointing her to the G1 La Troienne Stakes ?@ChurchillDowns? pic.twitter.com/qo2O3p6iDS

Dunbar Road notably won last year on debut, then jumped right into the Gulfstream Park Oaks (G2) to round out the exacta. She just missed the Kentucky Oaks on points but cranked back up in the summer, taking both Belmont Park’s Mother Goose (G2) and Saratoga’s Alabama Stakes (G1).

The Peter Brant runner didn’t miss the exacta until she faced older competition, finishing third in Keeneland’s Spinster (G1) before closing the season with a fifth in the Breeders’ Cup Distaff at Santa Anita Park.

Victories last season came between a mile and 1 1/4 miles, with the La Troienne sending her 1 1/16 miles off the bench.

Brown has noted his other top horses returning to training on social media, including champions Uni and Sistercharlie, as well as Grade 1 winner Guarana, who as with Dunbar Road is a newly turned older filly.

So happy to have recently crowned Eclipse Champion UNI back for her 6yo season after a well deserved vacation at ?@EisamanEquine? ! pic.twitter.com/4RoCr5GUbe

She’s baaaaack...Sistercharlie is back in light training at Palm Meadows gearing up for her 6yo campaign! ???? ?? @whitebirchpolo pic.twitter.com/5WIRfG9tKy

Multiple G1 winner GUARANA training this morning at Palm Meadows. I’m looking forward to a successful season with her this year! (Photos by ?@jockey_jordan?) ?@Three_Chimneys? pic.twitter.com/lyTk20slsX