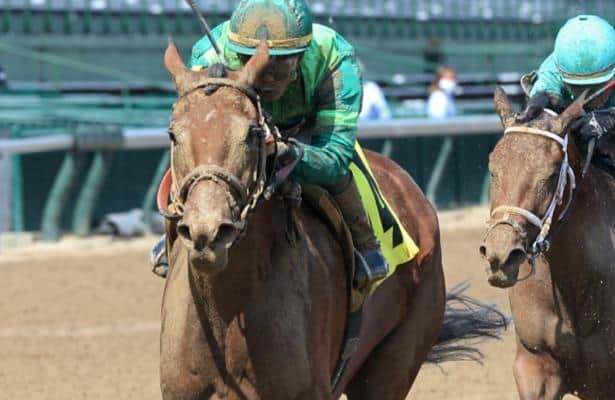 A slow break left Dunbar Road with plenty of work to do Saturday, but that she rallied wide to win Churchill Downs’ $100,000 Shawnee Stakes off the bench confirmed the 4-year-old filly will factor in the older dirt female division in 2020.

Jose Ortiz let Dunbar Road begin to dig midway through the far turn of the 1 1/16-mile race, and she quickly gobbled up her rivals, having only Awe Emma to catch once they hit the top of the stretch.

With a grinding running style and wide position, the daughter of Quality Road edged ahead late, hitting the wire in 1:43.55.

“It was good to get her back to the races," said Whit Beckman, assistant to trainer Chad Brown. "She broke a step slow and up the backside I got a little concerned but she showed how much of a game filly she is to dig down and win like that.”

At her peak last season Dunbar Road won Saratoga’s Alabama Stakes (G1) for owner Peter Brant. Brown had hoped to get Dunbar Road going as an older filly on Kentucky Derby weekend in Churchill’s La Troienne (G1); that race, as with the Run for the Roses, was postponed until September.

Dunbar Road scored at 3-5 in her first start since a fifth-place finish in the Breeders’ Cup Distaff. Last season, she also won the Mother Goose (G2) at Belmont and placed in Keeneland’s Spinster (G1) and the Gulfstream Park Oaks (G2).

Behind Dunbar Road, longshot Chocolate Kisses ran second by 1 3/4 lengths and Vault filled out the board after Flower Party led them through opening fractions of 24.72 for the quarter mile and a half in 48.66. It was a modest pace, but one the classier Dunbar Road managed to overcome.

Moving forward, stakes options for Dunbar Road could include the June 27 Fleur de Lis (G2) should she remain at Churchill Downs or the Ogden Phipps (G1) newly scheduled for June 13 at Belmont Park.