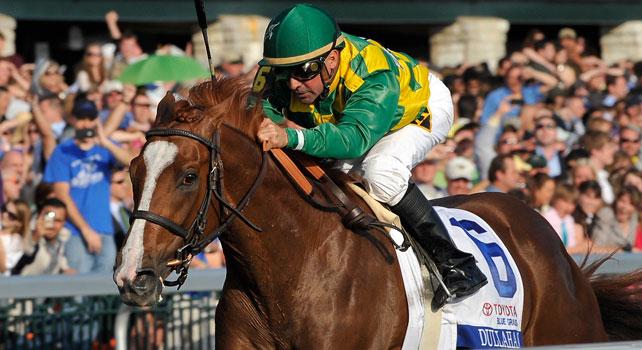 Dullahan, most recently third in the Kentucky Derby, was installed as the new 9-5 morning-line favorite over 10 rivals for Saturday’s 144th running of the Grade 1, $1 million Belmont Stakes. 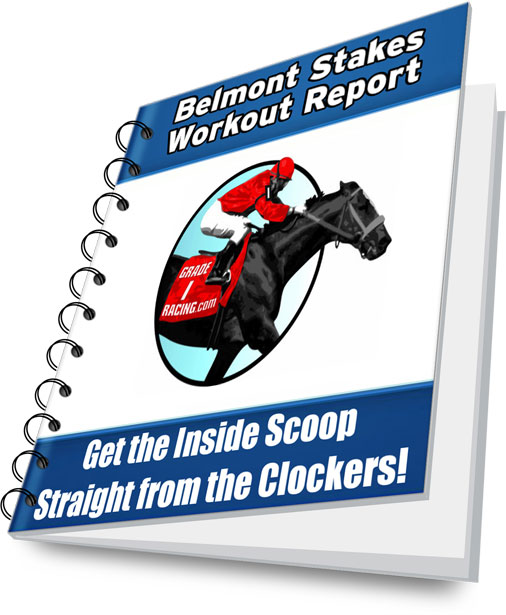 The Dale Romans-trained Dullahan had been the second choice behind Derby and Preakness winner I’ll Have Another before the Triple Crown hopeful was scratched this afternoon from the 1 ½-mile race with an injured left front tendon. The chestnut colt and jockey Mario Gutierrez will lead the post parade for the Belmont Stakes (post time 6:40 p.m., NBC 4:30 – 6 p.m.).

Winner of the 2012 Grade 1 Blue Grass and the 2011 Breeders’ Futurity on the synthetic surface at Keeneland Race Course, Dullahan is a half-brother to 2009 Derby winner Mine That Bird, who was third in the Belmont.  The Donegal Stable color-bearer will be ridden from post position 5 with Javier Castellano in the irons.

Second choice in the Belmont at 3-1 is Union Rags, whose seventh-place Derby finish is his only off-the-board performance in seven starts. Trained by Michael Matz for Phyllis Wyeth’s Chadds Ford Stable, Union Rags won the Grade 1 Champagne over the Belmont Park main track last fall and this year won the Grade 2 Fountain of Youth and finished third in the Grade 1 Florida Derby before the Derby.

Union Rags, who will leave from post position 3, will be ridden by John Velazquez, who won the 2007 Belmont aboard the filly Rags to Riches.

Hall of Fame trainer Bob Baffert, whose favored Bodemeister finished second in the Derby and Preakness, will saddle the lightly raced but promising Paynter, the 7-2 third choice in the Belmont.

The son of Awesome Again, a $325,000 yearling purchase, is 2-1-0 from four starts, with a maiden and allowance win bracketing a second in the Grade 3 Derby Trial and a fourth in the Santa Anita Derby. Paynter earned a 106 Beyer Speed Figure for his 5 ¾-length allowance victory at 1 1/16 miles on Preakness day at Pimlico, highest among the Belmont contenders.

Street Life, most recently third with blinkers on in the Grade 2 Peter Pan at Belmont on May 12, is the fourth choice at 8-1 on the morning line for the Belmont. Trained by Chad Brown, the son of Street Sense has two victories in five starts, both coming over Aqueduct Racetrack’s inner dirt course.

Jose Lezcano will ride Street Life from the rail.

Also starting will be Optimizer, 15-1, who is trained by Hall of Famer D. Wayne Lukas, a four-time winner of the Belmont; My Adonis, 15-1, attempting to give owners George and Lori Hall and trainer Kelly Breen, who won last year’s race with Ruler On Ice, a Belmont repeat, and Atigun (15-1) and Unstoppable U (20-1) from the barn of trainer Ken McPeek, who in 2002 sent out 70-1 shot Sarava to win the Belmont.

Rounding out the field at odds of 30-1 on the morning line are Ravelo’s Boy, Five Sixteen, and Guyana Star Dweej.