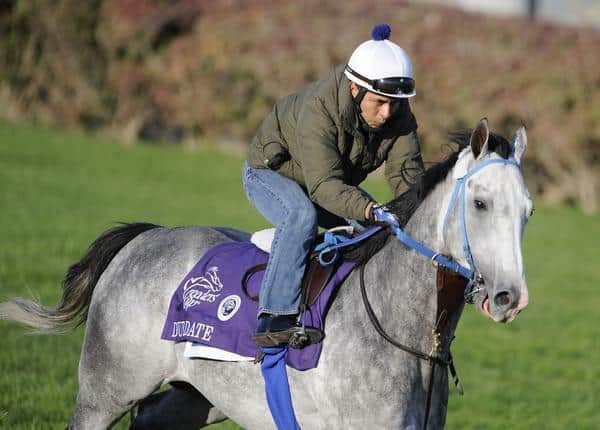 Richard, Bertram and Elaine Klein’s Due Date had one of his best days on Santa Super Saturday at Fair Grounds when he won the $60,000 Bonapaw Stakes, but the Klein family and trainer Steve Margolis had an even better one when entrymate Early Return bested Gold Mark Farm’s Backtalk by a neck for the runner-up spot.

“We got in a one-two punch today,” said Margolis, who saddled his first Fair Grounds winner exactly two years ago on Dec. 18, 2008 and has quickly become one of the most dominant stakes trainers of the Crescent City oval’s winter racing season. “Due Date had an unlucky trip last time (in Churchill Downs’s Grade I Breeders’ Cup Turf Sprint) but he has really come into his own lately, and he’s getting better as a 5-year-old going on to his 6-year-old season. It’s the same thing with Early Return – he’s the same age.

“I give a lot of the credit to Richard,” said Margolis, speaking of owner Klein. “He always wants to do the right thing with his horses. If they need some time off, he gives it to them. That’s why they stay around as long as they do. You have to do the right thing by them, and he knows that.”

Jockey Tony Farina guided Due Date to his 2 1/2-length tally in the Bonapaw, accomplishing the about 5 1/2-furlong distance over the Stall-Wilson turf course in 1:04.24 after Kirk Robison’s Western Smoke set early fractions of 22.23 and 46.31 before tiring to 10th position at the wire. The winner increased his career earnings to $240,788 with his seventh win in 29 lifetime starts.

Also of note, favored Central City, owned by Preston Stables, who finished fifth in the Bonapaw after pressing the pace, may still be able to keep his projected date in Dubai in March. Trainer Ronny Werner has always theorized that the Fair Grounds grass may not favor his colt’s running style and has not ruled out the Dubai trip. Central City was runner-up in the Grade II Breeders’ Cup Turf Sprint at Churchill Nov. 6.

Robert Yagos’ Archarcharch, the only maiden in the field for Saturday’s Sugar Bowl Stakes, eliminated that asterisk from his resume with a courageous 1 3/4-length victory in Saturday’s 60th anniversary edition of the $60,000 2-year-old sprint named after New Orleans’ famed college football game.

“I’ve always thought this might be a good horse because his works were way above average,” said Archarcharch’s trainer Jinks Fires, who previously saddled Patricia Blass’s Wildcat Shoes to win the 2003 Sugar Bowl Stakes. “In his only other start he didn’t have the best of trips.”

Archarcharch returned mutuels of $4 and $2.40 in the field reduced to four following three scratches earlier on Santa Super Saturday. The son of Arch accomplished the three-quarter mile distance in 1:10.49 and increased his career earnings to $47,744 with his first win in two starts.

Whispering Oaks Farm’s Joe Hollywood, ridden by Robby Albarado, made the pace in the Sugar Bowl with splits of  22:32 and 46.08, could not stay with the winner but was easily second best, paying a $2.20 place mutuel while finishing 5 3/4-lengths to the good of Benjamin Gonzalez’ B G Suavecito.

“I knew I had to stay close today because of the small field,” said winning rider Jon Court of his ride aboard Archarcharch, trained, incidentally, by his father-in-law. “I looked over and saw Robby (aboard Joe Hollywood) next to me and I could tell he had something left in the tank.”

“It was a tough race, but it set up good for me because there was a lot of pace in the race and I was able to tuck him in and get comfortable,” said winning jockey Shane Sellers of the Greg Geier-trained Country Flavor, who paid $24.40, got the 1 1/16-mile distance in 1:44.74 and increased his career earnings to $179,890 with his fifth win in 15 lifetime starts. David Holloway’s Dubious Miss finished third behind Z Humor.

Fastation paid a $4.80 win price, got the three-quarters in 1:11.19, won the race by 3 1/2-lengths and increased her lifetime earnings to $259,768 with her fifth win in eight career starts. “She’s such an honest filly and she opted to stay off the speed today,” said Bridgmohan of the change in running tactics. “She was quite comfortable back there and I let her do her thing, but she always does what you want her to do.”

Ron McCauley’s Wildcat Heiress went to the front and was never headed in Saturday’s $60,000 Esplanade Stakes. The daughter of Wildcat Heir made the pace under a relaxed hold by Corey Lanerie, tallied by 3 1/4-lengths while touring the 5 1/2-furlongs in 1:04.14, and increased her career earnings to $123,372 with her fourth victory in five starts.

Richard Davis’s Greeley’s Rocket finished second in the Esplanade with Michael Sandlass and Bettye Gabriel’s Kimbo third. Wildcat Heiress paid $6.60. “All I had to do was make sure I didn’t fall off,” said Lanerie.