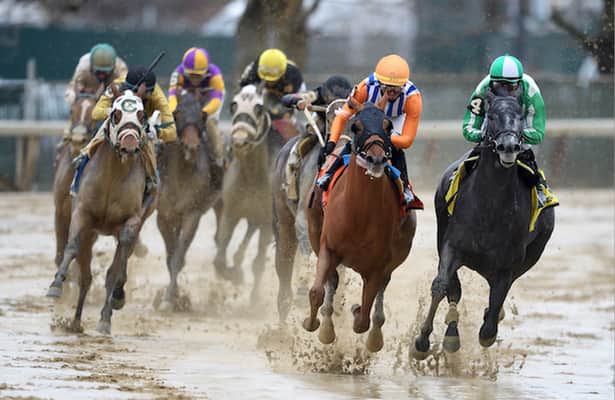 Dubyuhnell dug in gamely down the lane to outfinish the pacesetting Arctic Arrogance and win Saturday’s Grade 2, $250,000 Remsen, a nine-furlong test for juveniles at Aqueduct.

Trained by Danny Gargan, owned by West Paces Racing and Stonestreet Stables and piloted by Jose Ortiz, the chestnut son of Good Magic was a determined winner of the two-turn test over a sloppy and sealed main track which offered 10-4-3-2-1 Kentucky Derby qualifying points to the top-five finishers.

Dubyuhnell entered from a second-out graduation traveling one-mile over a sloppy and sealed main track on Oct. 2 at Belmont at the Big A. Gargan said he was impressed with the effort from the $400,000 Keeneland September Yearling Sale purchase, who he believes can be a contender for the 2023 Kentucky Derby on May 6 at Churchill Downs.

“He was drawing off,” Gargan said. “I think we were pretty lucky he does want to get the distance. We just have to stay sound and stay lucky and keep picking the right races. Maybe we’ll be somewhere in May.

“This colt here I think is more of the Derby type of horse because he wants to get the distance,” Gargan added. “A mile and an eighth suits him and he came running at the end. They were going fast. He was up toward the lead and they went three-quarters in 1:12 and change and that’s running today."

The New York-bred Arctic Arrogance, last-out winner of the Sleepy Hollow here against fellow state-breds, broke alertly under Jose Lezcano and took command through splits of 24.31 seconds and 48.13 with Dubyuhnell keeping close watch to his outside from second. The previously undefeated Tuskegee Airmen, who entered from a win in the Rocky Run at Delaware, settled in third position along the rail under Luis Saez with Prove Right and Quick to Accuse directly to his outside as three-quarters elapsed in 1:12.23.

Arctic Arrogance and Dubyuhnell got away from the field through the final turn, opening up seven lengths on their rivals at the stretch call and fought it out tooth and nail the length of the lane. But there would be no denying Dubyuhnell, who pulled clear in the final strides to secure the half-length win in a final time of 1:50.88. It was another 11 1/4-lengths back to Tuskegee Airmen in third with Quick to Accuse, Midnight Trouble, Il Miracolo and Prove Right rounding out the order of finish.

Ortiz, who has guided Dubyuhnell through all three career starts, said he put together a more prominent trip than expected.

"He broke good. Initially, we thought we were going to lay a little bit farther back than that because it looked like it was going to be a lot of speed in the race,” Ortiz said. “I told Dan, 'I'm just going to break forward and see what happens going into the first turn.' Surprisingly, it was only Lezcano there with Arctic Arrogance who I thought was one of the speed, but I was able to lay next to him every step of the way. I was very happy. On the backside, we hit the second turn and I knew it would be me or him.”

Lezcano said he was hoping for a bigger kick down the lane from the Linda Rice-trained Arctic Arrogance.

“My horse gave me a very good race. He ran hard and did everything right. The other horse kept running. I don’t know what happened with my horse because when I asked him, he didn’t take off like last time.” Lezcano said.

Gargan said Dubyuhnell will head to Florida but could return to the Big A in February for the 1 1/8-mile $250,000 Withers (G3), which offers 20-8-6-4-2 Kentucky Derby qualifying points to the top-five finishers.

?"We’ll take him down to Florida because of the weather and we won’t have to miss as much training," Gargan said. "I’m not ruling out that he couldn’t come back for the Withers, we don’t know yet. I’d love to win the Wood Memorial, it’s one of my favorite races. There’s no plans for where he’ll go next, but we could see him here for the Withers."