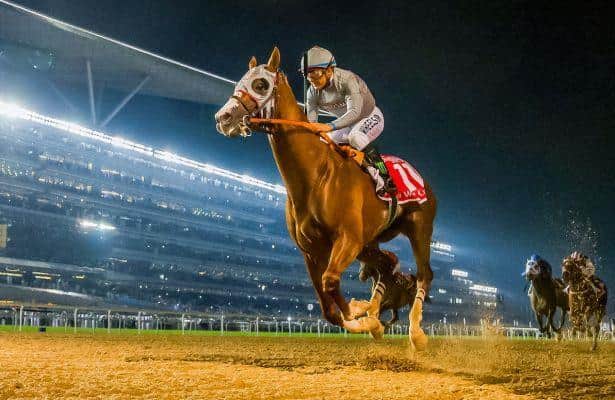 The U.S. has a strong set on contenders lined up for another crack at the Dubai World Cup. The 2017 lineup includes Arrogate, Hoppertunity, Gun Runner, Keen Ice, and Neolithic. The U.S. horses that have claimed the coveted title in the past have been some of the best names in racing, and Arrogate has a chance to join those names if he runs as expected.

After finishing second in 2015 and dealing with other setbacks, California Chrome returned to Meydan better than ever in 2016. Despite a slipping saddle and the pressure left over from the previous year, California Chrome and Victor Espinoza effortlessly cruised to redemption. As track announcer Terry Spargo put it, “It’s alchemy in Dubai. Chrome turns to gold.”

The versatile Animal Kingdom took the 2013 edition of the race. Having been successful on dirt, turf, and synthetic, Animal Kingdom took the turf route leading up to his international victory. He wrapped up 2012 with a runner-up effort in the Breeders’ Cup Mile, began 2013 with a second in the Gulfstream Park Turf Handicap, and then successfully switched back to the synthetic surface at Meydan.

The mighty Curlin finished his three-year-old season by winning the Breeders’ Cup Classic and attaining 2007 Horse of the Year honors. To begin 2008, he was shipped to Dubai, won a prep race there, and made a decisive victory in the Dubai World Cup at Nad Al Sheba. Curlin’s overseas victories were only the start of another campaign that would award him with Horse of the Year honors again.

While Street Cry was based in the U.S., it could be argued he did some of his best running while in Dubai. As a three-year-old, he received his first stakes win in the UAE Two Thousand Guineas and finished second in the UAE Derby. A year later in 2002, Street Cry went back to Dubai and won both his prep race and the Dubai World Cup itself.

Silver Charm was another Bob Baffert star, and gave the trainer his first Dubai World Cup win in 1998. Up until that point, Silver Charm had never finished worse than second and nearly pulled off the 1997 Triple Crown. In Dubai, Silver Charm faced challengers on both sides of him and had to battle it out the entire stretch, pulling off the feat by a nose.

Cigar started the U.S. off with a bang, winning the inaugural Dubai World Cup in 1996. With a 13 race win streak and a slew of Grade 1 titles, Cigar certainly looked like a dangerous threat. In the homestretch, Cigar received pressure from a challenger to his outside and nearly looked defeated, but his win streak was not over yet. Determined as ever, Cigar fought back and pulled ahead once again, crossing the wire first.