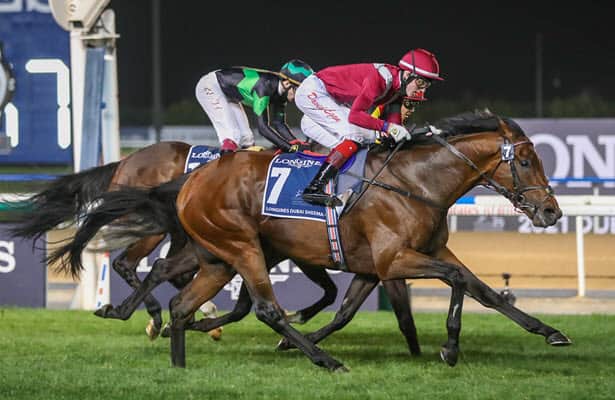 Five weeks after winning the Saudi Cup on dirt, Mishriff (6-1) returned to the turf and flexed his versatility to win a pulsating renewal of the Grade 1 $5 million Dubai Sheema Classic, the most thrilling race Saturday at Meydan on Dubai World Cup night.

Trained by Gosden and son – John and Thady – the 4-year-old colt by Make Believe took the widest trip in the stretch under 21-year-old David Egan and finally overcame second-place favorite Chrono Genesis (3-2) and third-place Love Only You (19-1) in the final strides of a battle in which the three horses refused to yield. Only a neck separated each of them.

“It was a strong battle inside the last two furlongs,” Egan said. “I was just glad I was able to do my job and get him to settle. We know he’s got an immense turn of foot. He showed that in Riyadh. I thought he had to dig deep today in the final furlong. I thought he was going to curl up on me, but it just shows how good he is.”

Mishriff’s winning time was 2:26.65 going 1 1/2 miles on the firm turf. His career earnings moved past $14 million. The victory was his second in a Group 1 turf race; the first came last summer in the Prix du Jockey Club at Chantilly, France.

“He’s such a tough horse, and he’s shown his versatility,” said Thady Gosden, who just this week was licensed to join his father as co-trainer. “He’s a brilliant horse and obviously really talented.”

Chanel Maker (13-1), the lone American horse in the field, set the early pace but faded late to finish eighth in the field of nine.

After settling off the pace early and with jockey William Buick racing wide into mid-pack on the backstretch, Godolphin homebred Rebel’s Romance (12-1) made a decisive charge to the front in the last 350 yards on the way to a 5 1/2-length victory the $750,000 UAE Derby (G2).

The 100 points that came with the win qualified the Dubawi gelding for a spot in the Kentucky Derby, but trainer Charlie Appleby would not commit to it, saying it was “a nice conversation to be having.” In discussing the future for Rebel’s Romance, he said, “we’ll be working back from the Dubai World Cup next year.”

Asked directly about the Derby in a text message from HRN, Appleby replied, “???”

After setting the early pace, the favorite Panadol (5-2) settled for second, earning 40 points that might be enough to earn a place in the gate May 1 at Churchill Downs. Trainer Salem bin Ghadayer would only say, “I’m pretty sure we are going to have something amazing for him next season (at Dubai). I think he has a lot of things left to show. I am really looking forward to next season.”

Rebel’s Romance had been undefeated in three races before he finished fourth last month in the Saudi Derby. Saturday’s victory was the first in the UAE Derby for both Buick and for Appleby, who had won five races in previous years on Dubai World Cup night.

Sixteen horses have previously shipped from the UAE Derby to run for the roses, but none has finished better than fifth in the Kentucky Derby.

Secret Ambition (10-1) led the whole way and ran on to a six-length victory in the $750,000 Godolphin Mile (G2), the first Thoroughbred race on Saturday’s Dubai World Cup card at Meydan.

“All week I’ve been saying that in this race there was no more experienced horse for this distance,” winning trainer Satish Seemar said. “He’s the most deserving horse in this field and most experienced, and it’s perfect.”

Fifth in the last running of this race two years ago, Secret Ambition was ridden by Tadhg O’Shea. The 8-year-old entire by Exceed and Excel and owned by Nasir Askar became the oldest winner in the 25 runnings of the Godolphin Mile.

With Frankie Dettori riding him down the middle of the track, Lord North (8-5) made a big move in the stretch to take the lead in the last 350 yards on the way to winning the $4 million Dubai Turf.

The Dubawi gelding making his 5-year-old debut for trainer John Gosden was racing for the first time since he finished fourth in the Breeders’ Cup Turf last fall at Keeneland. His last win had been at Royal Ascot last June in the 1 1/4-mile Prince of Wales’s (G1).

Racing forward near the lead through the first half of the race, British 4-year-old Subjectivist (6-1) moved to the front with a mile to go and ran away to a track-record victory in the $750,000 Dubai Gold Cup (G2), a two-turn, two-mile race on the firm Meydan turf.

The winning time for the Mark Johnston-trained colt by Teofilo was 3:17.77. Ridden by Joe Fanning, it was Subjectivist’s first race since he won on heavy going last October in the Prix Royal-Oak (G1) at ParisLongchamp.