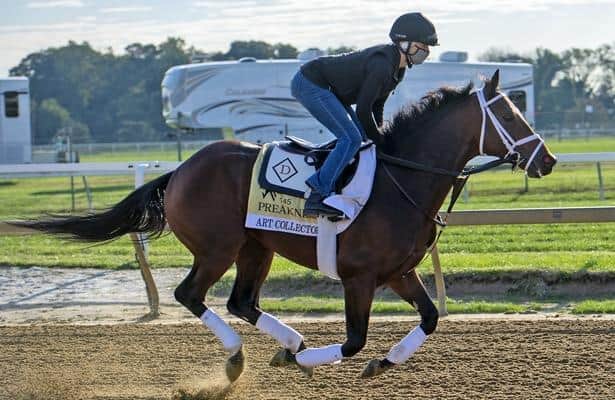 Blue Grass Stakes winner Art Collector is pointed toward the Breeders’ Cup Dirt Mile, where he will run that distance for the first time in his career.

“If everything goes right this week, that’ll be the plan,” trainer Tom Drury Jr. said. “I don’t know what the field size is going to look like. I guess the only thing that could affect you in a race like that is if you drew the outside. … If you got a bad post then you may rethink it.”

[RELATED: Prospective fields and odds for all 14 Breeders' Cup races]

Drury said Art Collector’s backup plan would be to run Nov. 27 in the Grade 1 Clark Stakes at Churchill Downs.

“He worked really good,” Drury said. “It was a maintenance kind of move, but I was very pleased. Brian (Hernandez Jr.) came out and breezed him. He was happy, I was happy.”

Drury confirmed that Hernandez, Art Collector’s regular rider, will again have the mount in the Nov. 7 Dirt Mile.

Drury said that although the field is not fully set for the Dirt Mile, he expects Art Collector, who finished fourth in the Preakness in his last race on Oct. 3, to stack up well. The field could include the likes of Met Mile (G1) winner Vekoma and Jesus’ Team, who finished third in the Preakness.

Drury said he does not expect a Breeders’ Cup victory to come easy.

“I don’t think it’s quite as deep as the Classic is going to be this year,” Drury said. “But they’re not going to give you a Breeders’ Cup. You have to go earn it and there’s going to be nice horses in there.”

For Drury, the race will be his first Breeders’ Cup as a trainer. He said he was trying to make the most of the opportunity while also appreciating the experience.

“It means everything,” Drury said. “It’s kind of like being able to compete in a Triple Crown race this year. You spend your life trying to get your hands on a horse like this and to get this opportunity.”

To make the trip even more sweet for Drury, a native Kentuckian, this year’s Breeders’ Cup is in his home state, at Keeneland.

“There’s really not any big traveling to worry about,” Drury said. “We know our horse runs well over Keeneland’s surface and likes that track. We know the facility well and we know what to expect. If you’re going to do something like this, this is certainly the way to do it.”