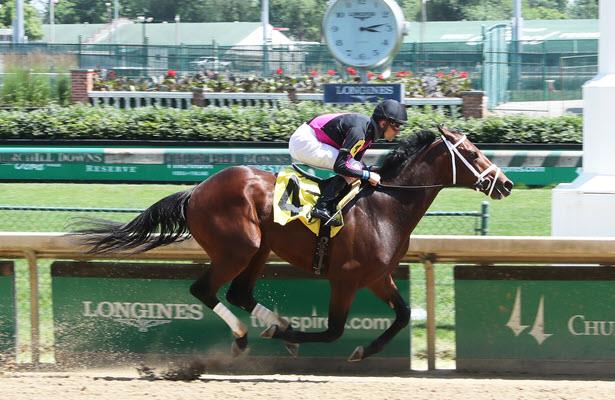 When Tommy Drury runs Keeneland’s Blue Grass winner Art Collector in Sunday’s $200,000 Ellis Park Derby, the trainer might be in unchartered water — but he’s very familiar with the route to get there.

During a training career that began almost 30 years ago, Drury has made the 284-mile round trip from his Oldham County base to Ellis Park countless times. Ditto the 176 miles to and from Cincinnati’s Belterra Park, the 250-mile loop up and back from Indiana Grand, 700 miles for West Virginia’s Mountaineer Park, and the 735-mile round trip from Ohio’s Mahoning Valley.

But never has Drury made the trek with a horse who is one of the favorites for the Kentucky Derby, whose four-month COVID-created delay to Sept. 5 made it possible for Ellis Park to stage a prep race for the Derby for the first time in the track's 98-year history.

“Gosh, I think the second horse I ever raced ran at Ellis Park,” the second-generation trainer said. “I’ve been going there my entire life. Winning the Blue Grass at Keeneland — normally when I go into Keeneland, our goal is just to win a race. And for Ellis to have a Derby prep and to be a part of that, it’s kind of my people, if you will. These are the tracks that I normally race at. To be able to go to these places and run in their big races, it’s a lot of fun.”

Owned by breeder and Louisville businessman Bruce Lunsford, Art Collector already is in the Kentucky Derby, thanks to the 100 qualifying points he earned in winning last month's Grade 2, $600,000 Toyota Blue Grass by 3 1/2 lengths over the impressive filly Swiss Skydiver. The 1 1/8-mile Ellis Park Derby offers 50 points to the winner, but for Art Collector, it's simply a tool in his preparation to get to the Kentucky Derby in the best condition possible to run 1 1/4 miles. Art Collector's regular rider is Brian Hernandez Jr., the 2012 Ellis Park meet leader.

Drury has been around a lot of top-caliber horses, but mostly he was getting 2-year-olds ready or bringing horses back off layoffs for other trainers. The Blue Grass was Drury’s first victory in a graded stakes, those designated as America’s best races. In fact, he’s only run in 12 other graded stakes. Drury, shipping around from his base at the Skylight training center in Goshen, has run in a slew of non-graded stakes, with 13 wins. While the Ellis Park Derby is not graded, it would be his second-most lucrative race to win.

The lifelong Louisvillian is determined to not only enjoy the ride but to make sure his crew at Skylight and Churchill Downs enjoy it as well.

“We’ve always been the guys behind the scenes,” Drury said Wednesday after Art Collector trained at Skylight. “A lot of the Grade 1 winners we’ve had here, a lot of people don’t know we were ever associated with them. And that’s our job, that’s what we do. We’re certainly happy to do that. Now all of a sudden it’s our name, and we get to be the ones to lead one over there and we get to kind of be involved at this level. Yeah, it’s been a lot of fun for all of us. These guys work really hard, and they deserve a lot of credit for our success.”

“It’s nice to be able to play the game at that level, even if it’s for a short period of time,” Drury said. “Just the education of having horses like that, all of a sudden Art Collector comes into my life and I felt that I’ve got a pretty good handle of what I need to be doing on a day-to-day basis to have him compete at this level.”

Art Collector started his career last year racing on grass (getting his first win at Kentucky Downs) before sprinting on dirt, going to Drury in January to get back in shape after time off. The plan was for Art Collector to go another trainer for his 3-year-old season. But because of the havoc the pandemic was having on racetracks, Lunsford asked Drury — insulated at Skylight with uninterrupted training — to go on and prepare Art Collector for his return to racing in May. After he won an allowance race for keeps at seven-eighths of a mile, Lunsford simply kept the horse with Drury. He's now 3-for-3 with Art Collector, including a 6 1/2-length second-level allowance victory at 1 1/16 miles over Indiana Derby winner Shared Sense, whom he'll meet again Sunday.

“Bruce was kind enough to leave him with us and give us an opportunity of a lifetime,” Drury said. “It’s certainly not something that’s taken for granted. We know how we got the horse, and we just want to make the most of it and try to remember to enjoy it while we’re here.”

If not for COVID-19, Drury wouldn’t have the horse, and even if he did, Art Collector wouldn’t have been in the Kentucky Derby on its original May 2 date.

“I was joking with someone the other day; this horse was a ‘half-mile fit’ the first Saturday in May,” Drury said. “There was zero chance. You couldn’t even consider the Derby if it had been on its normal schedule. Even with the Derby being pushed back, we were still in a situation where we absolutely needed everything to go just our way. In horse racing, more often than not, that doesn’t happen. It’s kind of been, ‘Gosh, this horse could maybe get us there.’ But in the back of your mind, you’re always thinking, ‘how often does everything go perfect?’

“I think that’s taken a little bit of the pressure off. I knew the water was going to get deep in the Blue Grass. He passed that test, and then you immediately work backward from the Derby. You need that next race; you need that next start. You look up, and here’s the Ellis race. Hopefully, we can just ride this out a little longer and keep things falling into place the way they have. It’s almost like the stars aligned for us.”

Now he just has to hope the stars stay that way for another four weeks. Especially for a lifelong Louisvillian, this happy turn of events is a bit mind-boggling, with Drury acknowledging a lot of nights lying awake “staring at the ceiling.”

He says that at age 28, “you’re thinking about winning Kentucky Derbys and Breeders’ Cups every day.” By the time he reached 48, Drury knew the hard reality probably was that something would “have to fall between the cracks" to even get a shot.

“I compare it to hitting the lottery,” he said. “You think about what it would be like to hit the lottery, and you think about how you would react and what you would do. For me, growing up in Louisville, you look at the Kentucky Derby the same way. You watch it from afar every year, and you’re a fan of horse racing. The horses and the people who are involved, to all of a sudden see your horse in your name and that race being mentioned, gosh, you just can’t find the words to describe it. It’s a dream come true.”

Entries will be taken and post positions drawn for the Ellis Park Derby on Thursday.