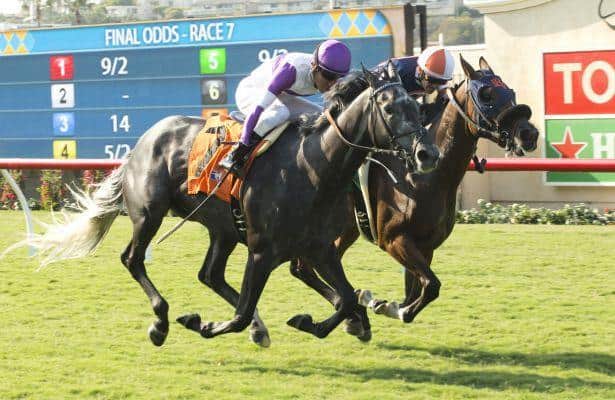 Reddam Racing’s Dressed to a T, the 6-5 favorite under jockey Mario Gutierrez, rallied powerfully in the stretch to overhaul Holgraeme in the final strides and win Del Mar’s feature race Thursday, a mile and three-eighths test of stamina over the infield Jimmy Durante Turf Course.

Holograeme, sent postward at 9-2 under Flavien Prat, took command entering the stretch to open a clear advantage but then was unable to resist the closing charge of the winner who scored by a nose in 2:16.38.

Dressed to a T, a California-bred filly by Square Eddie trained by Ben Cecil, scored her third success in eight career outings and returned $4.40, $3 and $2.20. Holograeme paid $4.40 and $2.80, while third-place Lily Kai paid $2.40 to show. Exuberante was withdrawn.

There were two winning tickets in the Pick Six and each paid $21,534.