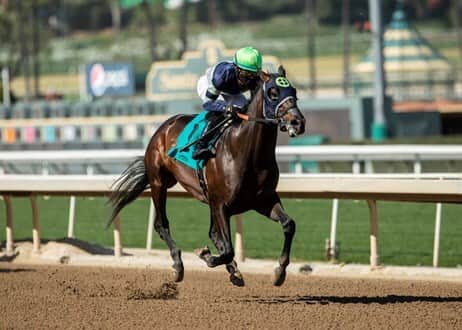 Since breaking his maiden in February, Dream Shake has had monthly assignments in Grade 1 or Grade 2 stakes on dirt against some of best 3-year-olds in the country.

But while the Oceanside rivals may come up short in accomplishments compared to the company Dream Shake has been keeping, they’re long on numbers. The field of 14 for the traditional opening day stakes of Del Mar’s summer season is the maximum allowed for the Jimmy Durante Turf Course.

“We didn’t want to ship again, and Del Mar’s races for him are all on grass until late in the meet,” Eurton said. “His sire won the Oceanside and then came back and won the Del Mar Derby. We thought the timing was good to run him now, and we’ll see if he likes it. You never know until you try.”

Twirling Candy, owned by the Craig Family Trust and trained by John Sadler, won the one-mile Oceanside in 2010 clear by 2¼ lengths as the 4-5 favorite making his first start on turf. He led throughout in scoring by 3¼ lengths as the 1-5 favorite in the 1 1/8-mile Derby. Both efforts were under jockey Joel Rosario and Twirling Candy was voted the Top 3-year-old of the meeting.

Dream Shake will break from the No. 6 post under veteran jockey Joe Bravo, a perennial top rider at Monmouth Park in New Jersey who has relocated to make Del Mar his summer headquarters.