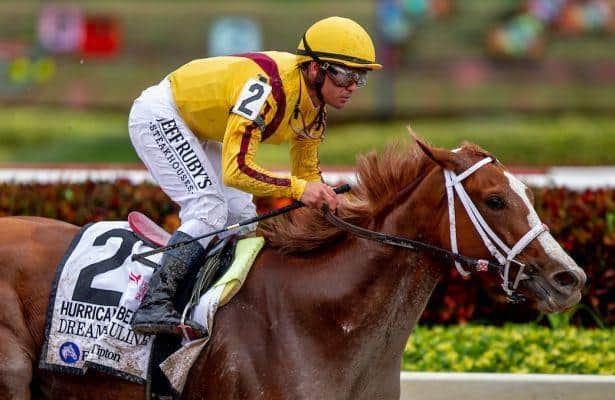 Dream Pauline rode the rail to victory in Saturday’s Grade 3, $150,000 Hurricane Bertie Stakes at Gulfstream Park, with the 5-2 third choice leading an upset of newly crowned Champion Female Sprinter Shamrock Rose, who finished fourth as the favorite on the Pegasus World Cup undercard.

A lightly raced homebred for Stonestreet Stables trained by Kiaran McLaughlin, Dream Pauline, a 4-year-old daughter of Tapit, notched her fourth win in five starts and picked up her second straight stakes victory at Gulfstream Park. She won the Sugar Swirl Stakes (G3), also over a sloppy track, back in December.

“She’s a special filly. We’ve always been high on her,” McLaughlin said. “She’s been a little unlucky, like not getting in the (Grade 2) Raven Run (at Keeneland Oct. 20), like having a temperature before the (Grade 1) Prioress (at Saratoga Sept. 2). But she’s a nice filly and Javier rode a great race today. Obviously, she’s won twice her on the wet, so she likes the wet.”

As for Shamrock Rose, who won the Raven Run two weeks prior to winning the Breeders’ Cup Filly & Mare Sprint at Churchill Downs, trainer Mark Casse said she will stretch out following Saturday’s effort.

“You can’t close today,” he said of the track. “She tried. She tried to come running. When we ran her in the Breeders’ Cup going seven eighths at Churchill, big pace, she could run them down. But she wants to go farther. So we’ll look for a race and run her back two turns. But I’m not disappointed in her.”

Blamed, the filly who dominated New Mexico a year ago before transferring East to Bill Mott, led early through fractions of 22.58 and 45.18. Stormy Embrace, second in the Sugar Swirl, was up close with Victory Rally ahead of Dream Pauline. Shamrock Rose started second to last in the field of eight.

Dream Pauline cut the corner entering the homestretch as Blamed struggled to hold her position up front. Shamrock Rose was in behind horses, but had too much work left when guided to the outside. Dream Pauline cruised home and completed seven furlongs in 1:21.45 over a sealed and sloppy track.

Castellano and Dream Pauline were 3 ½ lengths in front.

“I liked the way my horse performed. She broke well and got a good spot on the rail early,” Castellano said. “I knew there was a lot of speed in the race, so I kept track of the speed duel. I was lucky and fortunate to get through the rail and cut the corner and save some ground.

“I think the track is in good condition today and we are in good shape. I’m very lucky and fortunate to ride this type of horse. I give all the credit to the track superintendent and the management here at Gulfstream for maintaining the track. The way she handled the distance was great.”

McLaughlin thought a lot of Dream Pauline’s performance and will point toward a Grade 1, seven-furlong sprint for fillies and mares at Keeneland’s spring meet.