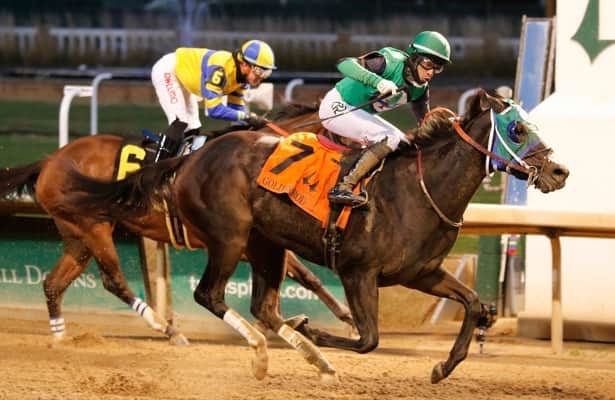 Photo: Candice Chavez/Eclipse Sportswire/CSM
Louisville, Ky.
Dream Lith came from the back of the pack and rallied down the stretch to win the Grade 2, $400,000 Golden Rod at Churchill Downs. Trained by Robertino Diodoro, the Medaglia d’Oro filly earned 10 qualifying points towards next year's Kentucky Oaks.

“(Diodoro) told me to keep the filly off the pace,” winning jockey Ramon Vasquez said. “We had a lot of speed in the race.”

Out of the gate it was Yuugiri who seized the early lead in the 1 1/16-mile race contested over a fast track at Churchill, Meanwhile, Dream Lith settled toward the back of the pack as Yuuguiri carved fractions of 24.04, 47.95, 1:12.85 for six furlongs.

In the stretch, Yuugiri continued on the lead, but was ultimately worn down by the eventual winner. Dream Lith, the 9-1 third-choice in the wagering, surged past that rival to win by a length. The final time was 1:44.72.

Dream Lith entered the race off of a fifth-place finish in the Alcibiades (G1) on Oct. 8 at Keeneland. She had preceded that with another fifth in the Spinaway (G1) at Saratoga.

Ryder Finney of Cypress Creek Equine, which owns the filly along with Arnold Bennewith, said Dream Lith came into the race in excellent condition.

“We gave her a little bit more time off and tried to bring her into this race really fresh and targeted this rather than going to the Breeders’ Cup,” Finney said. “She rewarded us big time.”

Finney said Dream Lith will now receive some time off before continuing on the Kentucky Oaks trail.

“We think the break did a lot of good coming into this spot and we don’t want to be too greedy here in the near future,” Finney said.

“She had beat the second-place horse last time out pretty handily,” McPeek said after the race. “The winner looked good on paper to me. But look, these are 2-year-olds. They are changing every day.”

Famed finished fourth and claimed the last of the race’s Oaks points, which were paid out to the top four finishers on a 10-4-2-1 scale.