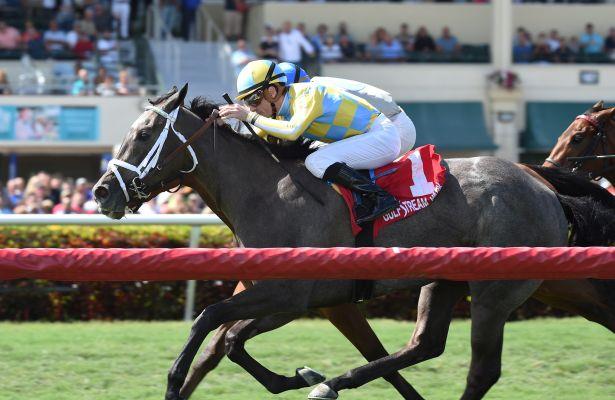 Dream Dancing posted back-to-back wins at Gulfstream Park last winter, including the first graded stakes triumph of her career, to open a sophomore campaign where she ultimately became a Grade 1 winner.

On Saturday, the connections of John Oxley’s homebred are hopeful Dream Dancing can kick off her 4-year-old season in similarly successful fashion as the lone graded winner in the $150,000 Marshua’s River (G3).

Dream Dancing, a gray daughter of prominent sire Tapit whose damsire, Monarchos, won the 2001 Kentucky Derby (G1) for Oxley, has not raced since finishing off the board in the Queen Elizabeth II Cup (G1) Oct. 14 at Keeneland, though trainer Mark Casse said the break was not entirely by choice.

“We had planned on taking her out and running her in the [G1 American Oaks] at Santa Anita [Dec. 30], but unfortunately the plane canceled at the last minute so we weren’t able to get her out there,” Casse said. “She’s been training extremely well.

“This is a big step,” he added. “She’s now got to run against the older girls and the race is probably a little shorter than she’d like, but we do know that she likes it at Gulfstream. She’s run twice and won twice, so that’s a nice thing.”

The late-running Dream Dancing won an optional claiming allowance by two lengths last January and came back five weeks later with a dramatic victory in the Herecomesthebride (G3), where she split horses in deep stretch to get up by a neck. Both races came at 1 1/16 miles.

Dream Dancing placed in two other Grade 3 stakes in the spring and summer before coming with a six-wide rally to take the 1 1/8-mile Del Mar Oaks (G1) by a nose in mid-August, her last start  prior to the Queen Elizabeth.

Off the board in three lifetime tries on dirt, Dream Dancing owns four wins, two seconds and a third from 10 turf starts including her maiden triumph in 2016 at Saratoga.

“I don’t think you ever know for sure, but she’d always trained like a good horse. I thought the race at Saratoga where she broke her maiden was impressive,” Casse said. “The funny thing about her is, I know her dirt performances haven’t been that good, but she actually likes the dirt, as well. It’s hard to believe when you look at it but she trains as good as a horse can train on the dirt. Someday, I guess we’ll try it again.”

With regular pilot Julien Leparoux riding out of town Saturday, Irad Ortiz Jr. has the mount on Dream Dancing from outside Post 8 at highweight of 123 pounds.

Jordan Wycoff’s Gianna’s Dream nearly became a graded winner last out, coming up a neck short of On Leave following a prolonged stretch drive in the one-mile My Charmer (G3) Dec. 16 at Gulfstream.

Prior to that effort, the 5-year-old Twirling Candy mare won back-to-back turf stakes at Remington Park and was beaten only 1 ¼ lengths in the Violet (G3) last summer at Monmouth Park.

“She ran a great race last time and was unlucky to lose, no excuses. She was just second best,” trainer Mike Maker said. “She’s doing great. She’s a little iron filly. She runs her eyeballs out every race. The distance won’t be an issue at all.

“The last race there wasn’t a whole lot of speed so she was up close but she’s the kind of horse that you can place wherever you need her,” he added. “I think a graded win would help her broodmare value tremendously but she’s such an honest horse it would be something nice to put on her resume.”

Tyler Gaffalione, aboard for each of the past two starts, gets a return call from Post 5 at 121 pounds.

Alex G. Campbell Jr.’s multiple stakes-winning homebred Ultra Brat is entered to make her second start off an 11-month layoff in the Marshua’s River. The 5-year-old Uncle Mo mare won the 1 1/16-mile Tropical Park Oaks in December 2016 at Gulfstream, and didn’t race again until leading into the stretch of the six-furlong Autumn Days Stakes Nov. 26 at Aqueduct before tiring to fourth, beaten three lengths.

“I thought she ran very well her first start back off the layoff,” trainer Graham Motion said. “It was a very respectable effort, and she’s trained well since.”

Completing the field are Inside Out, fifth in the My Charmer, and Monroe Stakes winner King’s Ghost from the barn of trainer Marty Wolfson; Kylla Instinct, coming off a one-mile optional claiming allowance win Dec. 20 at Gulfstream; Abbreviate and Vendita.