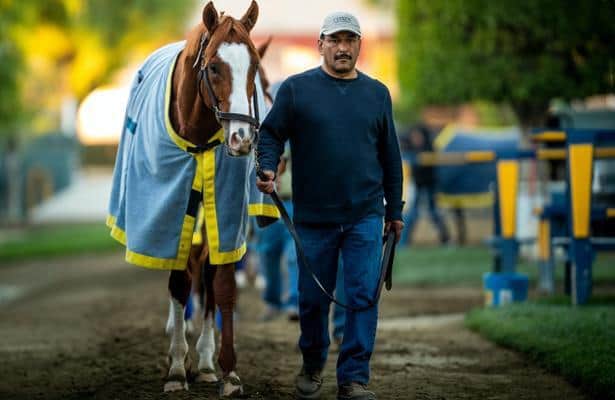 A star-studded field for Saturday's Grade 2, $600,000 Oaklawn Handicap will go without one of its main contenders with the scratch of Improbable.

Trainer Bob Baffert confirmed via text message that the 4-year-old City Zip colt is in good health. The reason for the defection is squarely due to the far outside No. 14 post position.

Improbable also drew wide in his April 11 season debut in the Oaklawn Mile when, stuck outside throughout, he inherited the lead at the top of the stretch but was run down by Tom's d'Etat.

The horse remained at Oaklawn Park between starts given no other major races on the stakes schedule for other horses aside from the 1 1/8-mile Oaklawn Handicap, which will include six last-out graded stakes winners. But the racing landscape has changed since then.

This week, Santa Anita Park released a condition book and stakes schedule should the track receive approval to begin racing as soon as May 15. On the docket is the June 6 Gold Cup at Santa Anita (G1), Improbable's new 1 1/4-mile target back home in California, Baffert said.

A flashy chestnut, Improbable is campaigned by WinStar Farm, China Horse Club and SF Racing. At age 2, he went unbeaten with a victory in the Los Alamitos Futurity (G1). After going off as the betting favorite in the Kentucky Derby and Preakness Stakes, Improbable cut back to a mile to score a stakes at 3 at Del Mar.

The Oaklawn Handicap runs as Race 12, between split divisions of the Arkansas Derby (G1) in which Baffert sends out unbeaten favorites Charlatan and Nadal.