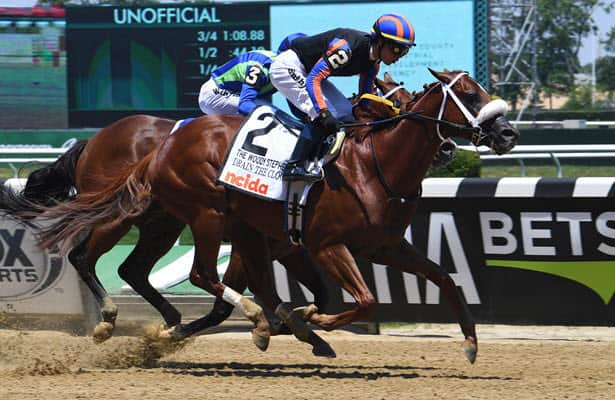 Drain the Clock pressed the pace early and overtook even-money favorite Jackie’s Warrior from the outside in the final furlong and prevailed by a neck in Saturday’s Grade 1, $400,000 Woody Stephens for 3-year-olds going seven furlongs at Belmont Park.

The 37th running of the Woody Stephens kicked off a sequence of nine consecutive graded stakes and was the first of eight Grade 1s on a loaded 13-race card that will be highlighted by the 153rd running of the Belmont Stakes in Race 11.

Slam Dunk Racing Stable and Madaket Stables’ Drain the Clock entered off two graded stakes wins in his last three starts for trainer Saffie Joseph Jr. Making his Grade 1 debut, the Maclean’s Music colt broke sharp from post 2 under Jose Ortiz, while Jackie’s Warrior missed the break and fell to last-of-six out of the gate.

Jockey Joel Rosario moved Jackie’s Warrior up immediately from the rail, expending energy to pace the field through an opening quarter-mile in 22.09 seconds and the half in 44.19 with Drain the Clock in close pursuit on the main track rated good.

The two leaders stayed near the middle of Big Sandy out of the turn, with Jackie’s Warrior still in command at the top of the stretch. But Ortiz switched from a left-handed stick to the right and Drain the Clock was unrelenting in pursuit, running down two-time Grade 1-winner Jackie’s Warrior to hit the wire in 1:22.27.

Drain the Clock, bred in Kentucky by Nick Cosato, won for the sixth time in eight career starts and has amassed four stakes wins this campaign, including the Limehouse and Grade 3 Swale at Gulfstream Park and a 1 3/4-length victory in the Grade 3 Bay Shore last out in April at Aqueduct Racetrack.

After running second in the 1 1/16-mile Grade 2 Fountain of Youth in February at Gulfstream, Joseph, Jr. decided to take him off the Kentucky Derby trail and shorten him up, with the moving paying off with back-to-back sprint scores.

“This is the benefit of making a tough decision because he got 20 points [for the Kentucky Derby] and he could have picked up more,” Joseph, Jr. said. “Would he have won? Probably not. That’s stretching him. After that, it was just cut back. We figured let’s have a good horse at one turn.”

“We talked it over so much with [co-owner] Nick Cosato [of Slam Dunk Racing] and he wanted to break well and use him for the lead,” Joseph, Jr. said. “We just left it up to Jose [Ortiz]. We told him the break was important and to make Rosario make a decision. If they’re going to let you lead, lead.”

Ortiz, who picked up the mount after brother Irad Ortiz, Jr. was injured in a spill on Thursday, won his first career Woody Stephens. It was the second time in two days Ortiz won a graded stakes race filling in on a horse his brother was slated to ride before the injury after piloting Firenze Fire to victory in Friday’s True North (G2).

“If Rosario wanted the lead, I’d rather have him rush inside of me,” Ortiz said. “It was my game plan to break better, outrun him out of the gate in the first couple jumps and go as far out as I could, as long as I was clear. I wasn’t planning to mess with anybody; you can see as soon as Rosario came back in, I came back in. I didn’t want him outside of me putting pressure on me the whole way.

“It’s great for racing” he added. “That’s what it’s all about, people want to come here to see those kinds of duels. It was a great race, everybody gave their best. I’m just happy we came out with the win and I’m happy filling in for Irad and not messing it up. He told me the horse was very classy, Saffie was great, and the owner was great, too. The owner was the one that told me if you can outrun him out of the gate and make him go inside, that would be great, to have him inside of us.”

Jackie’s Warrior, the winner of last year’s Champagne (G1) and Hopeful (G1) for Hall of Fame conditioner Steve Asmussen, was 7 1/4-lengths clear of Nova Rags for second. A fellow son of Maclean’s Music, Jackie’s Warrior’s lone career off-the-board finish in eight starts was a fourth-place effort in the Breeders’ Cup Juvenile in November at Keeneland.

“He just kind of stumbled a little bit coming out of the gate and missed the break,” Rosario said “Then he went and did his best, but I think the break out of the gate was the key. He still ran his race.”

“The track is still playing a little bit to the fast side, which will benefit horses on the lead,” Alvarado said. “My horse broke good and I let him settle and make a run. He was there for me. He was trying for me at the end.”