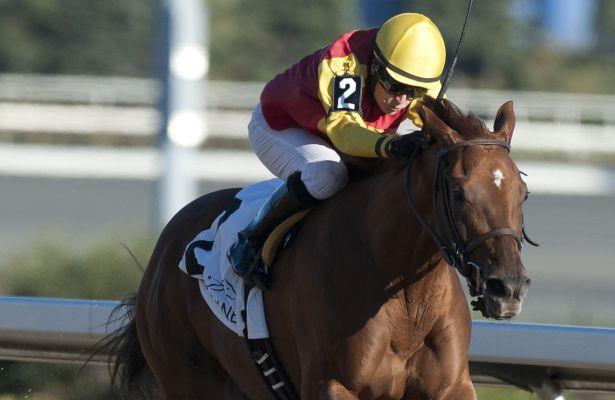 The six furlong Bull Page attracted a field of five Ontario-sired 2-year-olds and Waubaushene, breaking from the outside, showed briefly in front before Dragon’s Cry moved up to challenge on the inside.

The pair dueled through an opening quarter in :22.96 with the other three contestants taking up stalking positions while in a line of three. Silent Flash was on the outside, keeping 1-2 favorite Signature Spring pinned between horses with Pachi Cruze on the rail.

Meanwhile, Dragon’s Cry and Waubaushene continued their front-end duel with the former opening a one-length advantage through a half in :45.88. The others weren’t far off turning for home but Signature Spring and Pachi Cruze lacked clear paths as Dragon’s Cry spurted away to a three-length lead through five furlongs in :57.91.

Signature Spring had found a seam late in the lane, but it was too little too late as his closing bid fell short three-quarters of a length short. Pachi Cruze plugged on for third money, 4 ½ lengths behind the runner-up, with Waubaushene another length back in fourth and a weakening Silent Flash completing the order of finish.

“The horse was 100 percent, and ran big,” said Ryan. “He seems like he’s getting betting and better, like he’s just figuring it out. He’s very classy and easy to work with.

“He just wants to please you and do what you want him to do,” continued Ryan. “He’s a very nice ride.”

Dragon’s Cry had finished second, 3 ½ lengths behind Signature Spring, when both were debuting at six furlongs here Aug. 20 but came back to record his own impressive maiden victory at the same distance. Signature Spring also won his second start, the six-furlong Colin Stakes.

Owned and bred by Goldmart Farm, Dragon’s Cry is trained by Bob Tiller.

“He’s a laid-back horse in the morning and he’s doing so well right now,” said Tiller. “When the fight’s on, he shows up so far. We’re really pleased with him.”