Dragon Bay looks for another upset in 2017 Woodbine Mile 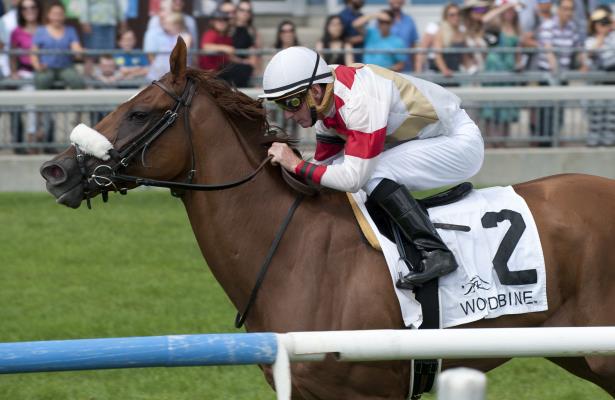 Dragon Bay has played the role of dragon slayer on two occasions this year to score graded stakes upsets for trainer/co-owner Stuart Simon and he will be looking to reprise that role in this year’s star-studded edition of the Ricoh Woodbine Mile 2017 on Saturday, Sept. 16.

The son of Parading and Cologne sold for just $6,000 as a yearling at the 2014 Fasig-Tipton Kentucky Fall Sale, but caught Simon’s eye in his first career start in the Victoria Stakes at Woodbine.

“He just showed a lot of promise,” said Simon, who struck a deal with Cary Brooks to purchase Dragon Bay privately with longtime partners Brent and Russell McLellan. “He ran third in a stakes race his first start of his life on the grass and just looked like a good physical specimen and showed talent.”

Dragon Bay’s early display of talent has escalated into a five wins and almost $450,000 in earnings, but his success on the track has not come without some challenges.

“He’s had his challenges because we had to sort out different equipment issues,” said Simon. “He’s always had lots of talent, but had equipment issues because he had a habit of wanting to run greenly. But he’s matured nicely and got over that so he’s been good now.”

This year, Dragon Bay has earned a pair of Grade 2 stakes wins at Woodbine while defeating the odds-on favourites. He pulled off an 18-1 upset over two-time Sovereign Award Champion Older Horse Are You Kidding Me in the 1-1/16 mile Eclipse Stakes on May 20 and upended Grade 1 runner Can'thelpbelieving in the 1-1/4 mile Nijinsky on the turf at the end of July.

Last time out in the Sky Classic (Gr. 2) on August 20, he finished fourth, giving way in the 1-3/8 mile turf test after being involved in a pace battle.

“He’s doing really well, he breezed well on Friday and he’s really healthy and ready to go,” said Simon after the chestnut gelding worked five furlongs in 1:01.40 over the all-weather track.

Gary Boulanger is expected to ride Dragon Bay in the Woodbine Mile for their fifth straight pairing.