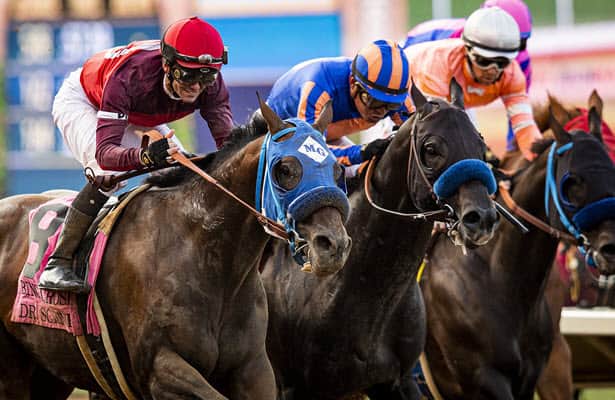 After scratching last year's winner, Collusion Illusion, from the $300,000 Bing Crosby Stakes (G1) earlier in the day, trainer Mark Glatt made it back-to-back anyway when 3-year-old Dr. Schivel rallied on the outside to take the six-furlong feature at Del Mar on Saturday.

Dr. Schivel and Flavien Prat were content to sit off opening fractions of 21.83 and 44.67 set by Brickyard Ride before taking the overland route into the stretch and surging past Eight Rings late to score by a neck in a final time of 1:10.47.

Well done, Dr. Schivel! He just won the #WinAndYoureIN Bing Crosby Stakes and punched his ticket to the #BreedersCup at @DelMarRacing! Congrats to the connections!pic.twitter.com/qQREMrxm16

"He broke well, then when we went across the gap, he grabbed the bit," Prat said. "He was running well, pretty much all the way around. He was game late. Good win.”

Dr. Schivel, last year's Del Mar Futurity (G1) winner, paid $6.80 as the second-choice in the field. As a Breeders' Cup Challenge race, he earns a fees-paid berth into the $2 million Breeders' Cup Sprint at Del Mar on Nov. 6.  Eight Rings was followed across the wire by favorite C Z Rocket with Law Abidin Citizen, also trained by Glatt, completing the superfecta.

Glatt indicated their could be bigger things ahead for Dr. Schivel, who improves his record to 6: 4-1-1 with earnings of $416,000.

"This is a real racehorse," Glatt said. "He beat the olders today, and hopefully in November he’ll be able to do it again.

Dr. Schivel won the seven-furlong Del Mar Futurity last September for trainer Luis Mendez and was subsequently sent to the sidelines. The 3-year-old Violence colt resurfaced for the new barn after more than nine months on June 18 and promptly scored in a second-level allowance at Santa Anita Park.