Dr. Schivel has yet to bounce back from his Mideast journey 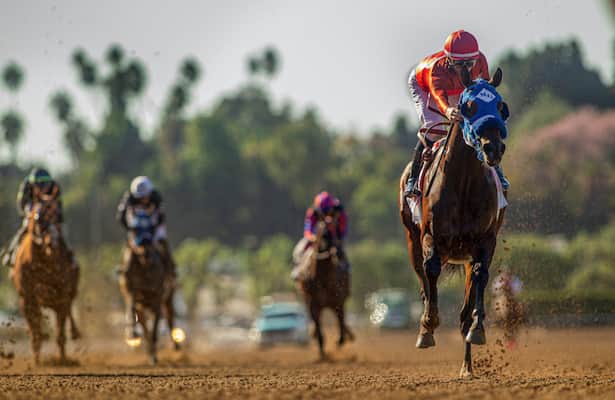 According to trainer Mark Glatt and co-owner Tim Cohen, the 4-year-old son of Violence has lacked his usual fire since he returned from a third-place finish in the Grade 1 Dubai Golden Shaheen on March 26.

“We’re going to take it one day at a time here, and he’ll get back to where I want to see him on a consistent basis sometime soon,” Glatt said. “If that gets us to the Breeders’ Cup at the end of the year, great. I guess there is only one Breeders’ Cup, but there are a ton of opportunities out there.”

Glatt said the “best-case scenario” would have Dr. Schivel return in time to compete in one of the Breeders’ Cup “win and in” races in early October as a prep for the Nov. 5 Sprint at Keeneland Race Course. The Oct. 7 Phoenix Stakes (G2) at Keeneland is part of the Breeders’ Cup Challenge Series and would offer the added benefit of providing a race over the track for the West Coast burner.

Dr. Schivel suffered arguably one of the toughest beats in Breeders’ Cup history when streaking Aloha West ran him down in the shadow of the wire in last year’s Sprint and nipped him by a nose at Del Mar.

The connections had hoped Dr. Schivel would be ready to defend his title in the Bing Crosby Stakes (G1) when it is run July 30 at Del Mar. He returned to training in June after being given down time at Tim Cohen's picturesque Rancho Temescal in Piru, Calif. They never came close to making the Bing Crosby with a colt who has yet to return to the work tab.

Dr. Schivel is owned by the father-son team of Jed and Tim Cohen, Reeves Thoroughbred Racing and co-breeder William A. Branch.

“That trip can do different things to different horses,” Tim Cohen said.

The third-place finish to 8-year-old Switzerland in the Golden Shaheen was worth $200,000 and boosted Dr. Schivel’s earnings past the $1 million mark at $1,076,500. The two-time Grade 1 winner has swept half of his 10 starts with a pair of second-place finishes and an equal number of third-place efforts. He failed to hit the board once, when he faltered in seventh in the Malibu (G1) to close his 3-year-old campaign.

Cohen said of the Dubai venture, “I don’t regret it. He’s still young. He’s got plenty of time to do lots of things.”

Glatt also defended the decision. “I’m not going to look back and dwell on it and say, ‘Maybe he shouldn’t have gone,’ " he said. “He had an excellent opportunity for a $2 million purse. He did not have a perfect trip by any stretch of the imagination. Otherwise, I think he would have been right there for the win.”

Although farms have made inquiries about acquiring Dr. Schivel as a stallion, it appears very likely that he will compete as a 5-year-old. “There is more to accomplish with the horse going into next year,” Glatt said. “He’s a sound horse still. I don’t think there is any reason to think he wouldn’t race another year.”

Would Glatt send another horse to Dubai based on his current experience?

“I don’t know the answer to that question,” he replied. “I’d really have to think seriously hard about going that far and what it can potentially do to your horse down the road.”