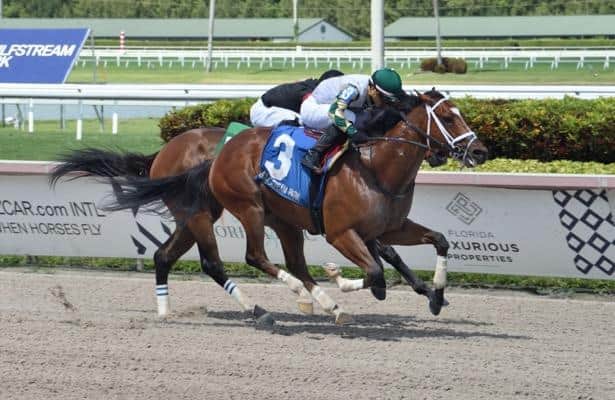 Double Crown held off Grade 2 hero Green Light Go, then survived an objection to make his stakes debut Saturday a winning one.

Pace setter Cajun Casanova went the first quarter-mile in :22 1/5 as Green Light Go sat second. Jockey Cristian Torres had Double Crown sitting in the middle of a three-wide group just off the leaders.

The Bourbon Courage gelding Double Crown moved up coming off the turn and rallied to Green Light Go’s outside. The favorite was then sandwiched in early stretch between Double Crown and Cajun Casanova, who seemed to drift up slightly from his inside lane.

Double Crown drove on to the lead and scored by a neck over Green Light Go, stopping the clock in 1:16 and 2/5 seconds. With Verve got up for third.

An objection was lodged over the stretch incident, but stewards upheld Double Crown’s victory, which returned $7.60.

“He’s coming along and doing well,” said Ritvo, who also took the 2017 Roar with Classic Rock. “We were just hoping he’d run to how he was training. He’s been doing so good. It was a big improvement last time and I’m not really sure he loved the mud, but he still ran good. He just loves to run.”

Reeves Thoroughbred Racing campaigns the Maryland-bred Double Crown. He debuted a winner last September at Laurel Park, then was runner-up in his second career start April 26 in a Gulfstream allowance race.