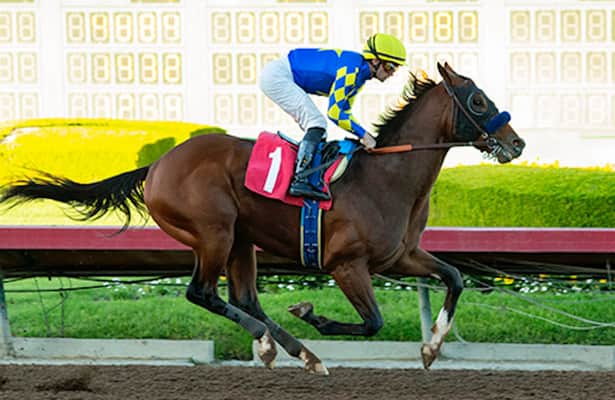 Winning from the rail like a seasoned pro in his first start, Doppelganger retains the services of Flavien Prat as he heads a field of five sophomores going seven furlongs in Saturday’s Grade 2, $200,000 San Vicente Stakes at Santa Anita.

One of three Bob Baffert trainees, Doppelganger, a bay colt by Into Mischief, appears headed to the Kentucky Derby Trail in what will be the 80th running of the San Vicente.

Baffert’s Pinehurst, a winner of the Del Mar Futurity (G1) in his second start, no doubt will vie for favoritism with Doppelganger as he cuts back in distance after a fifth-place finish in the Breeders’ Cup Juvenile.

Baffert also will send out McLaren Vale, who broke his maiden at first asking with John Velazquez and will be ridden by Abel Cedillo on Saturday.

Richard Mandella’s Forbidden Kingdom, second to highly regarded Messier in a Grade 3 stakes Nov. 14, has plenty of early speed and rates a big chance with Juan Hernandez back aboard.

A $570,000 purchase as a yearling, Doppelganger, who is out of the Quiet American mare Twice the Lady, was shuffled well back in his debut Dec. 11 at Los Alamitos but was in-hand with Prat as he cruised into contention and responded with an impressive stretch kick when called upon to win off by 3 1/2 lengths going six furlongs. Owned by SF Racing, Starlight Racing, Madaket Stables et al, Doppelganger earned an 80 Beyer Speed Figure and appears to have any kind of future.

A first-out maiden winner going five furlongs on Aug. 1 as the 8-5 favorite, Pinehurst was off at 4-1 in the Del Mar Futurity and won with consummate ease by 4 1/2 lengths. With regular rider Mike Smith committed to ride eventual winner Corniche in the Breeders’ Cup Juvenile, John Velazquez took over. Although Pinehurst was attentive to the pace, he tired through the lane to be beaten 8 1/2 lengths at 1 1/16 miles.

A $385,000 Keeneland September Yearling, Pinehurst, who is owned by SF Racing, Starlight Racing, Madaket Stables et al, is easily the leading money earner in the field with $272,000 and will be reunited with Smith for his fourth start.

An impressive first-out maiden winner going 5 1/2 furlongs on Aug. 21 at Del Mar, Forbidden Kingdom, a $300,000 yearling purchase who is by 2015 Triple Crown winner American Pharoah, transitioned to five furlongs on turf in the ungraded Speakeasy Stakes here on Oct. 1 and was third, beaten 3 1/4 lengths as the 9-5 favorite.