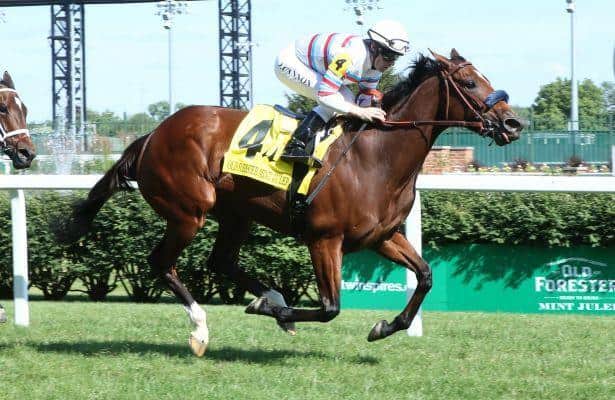 Dom Felipe LLC’s Dona Bruja (ARG), winner of the Old Forester Mint Julep Handicap (Grade III) on Churchill Downs’ Matt Winn Turf Course in June, will seek her second stakes triumph over that surface when she breaks from an outside post against 11 rivals in Saturday’s 44th running of the $100,000 Cardinal Handicap (GIII).

The 1 1/8-mile turf test for fillies and mares is scheduled as the 10th event on an 11-race program that opens with the first race at 1 p.m. (all times EST). The Cardinal, which has a post time of 5:24 p.m., shares the Saturday spotlight with the 10th running of the $80,000-added Bet On Sunshine Overnight Stakes for 3-year-olds and up at seven furlongs. The Bet on Sunshine will be run as Race 5 with a scheduled post time of 2:55 p.m.

Dona Bruja (14-10-3-0—$446,568) made her United States debut in the $100,000 Old Forester Mint Julep Handicap in June and defeated a contentious field by 1 ½ lengths. Following her Mint Julep victory, the 5-year-old mare, trained by Ignacio Correas IV, recorded a one-length score in the $100,000 Modesty Handicap (GIII) at Arlington Park in July.

The Argentina-bred was favored in August’s $600,000 Beverly D (GI) at Arlington Park but was the runner-up behind dead-heat winners Dacita and Grand Jete. Dona Bruja has only finished off the board in one career start, a fourth-place finish in the Oct. 7 $400,000 First Lady (GI) at Keeneland.

Jockey Ricardo Santana Jr. has the riding assignment for Dona Bruja and will break from post 12 under the high weight of 122 pounds.

Chief among Dona Bruja’s challengers is Rebecca Hillen’s Beauly (GB) (13-3-1-0—$149,937). The 4-year-old filly by Sea The Stars (IRE) was most recently fourth in the $500,000 Flower Bowl Invitational (GI) on Oct. 8 at Belmont Park. Beauly, trained by Brendan Walsh, drew post seven with leading rider Corey Lanerie and is assigned 118 pounds.

Other major contenders in the Cardinal Handicap are a pair of Ian Wilkes trainees: Whitham Thoroughbreds’ Linda (14-3-4-5—$402,410), the runner-up in the Indiana General Assembly Distaff on July 15; and Deborah Wilson’s Res Ipsa (15-4-1-5—$243,450), a winner of two-consecutive allowance races. Brian Hernandez Jr. rides Linda and will break from post nine while Julien Leparoux has the call on Res Ipsa from post 11.

Katherine Ball’s homebred Limousine Liberal, one of the top sprinters in the country, tops a field of eight in the Bet On Sunshine Overnight Stakes.

Limousine Liberal, trained by Ben Colebrook, won a trio of stakes races at Churchill Downs during the Spring Meet that began with a 13-1 upset in the $500,000 Churchill Downs (GII) on the Kentucky Derby undercard. The 5-year-old gelding by Successful Appeal was the heavy favorite in the June’s $100,000 Aristides Stakes (GIII) and scored a 2 ½-length victory over The Truth Or Else. Limousine Liberal closed out the meet with a 2 ¾-length win in the $70,893 Kelly’s Landing Overnight Stakes on July 1.

Following his successful Spring Meet, Limousine Liberal tested the $350,000 Alfred G. Vanderbilt Handicap (GI) on July 29at Saratoga and finished third, beaten eight lengths. In his most recent start, the $250,000 Phoenix (GII) on Oct. 6 at Keeneland, Limousine Liberal was narrowly defeated by Whitmore and Awesome Banner.

Lanerie has the call on Limousine Liberal and drew the outside post No. 8.