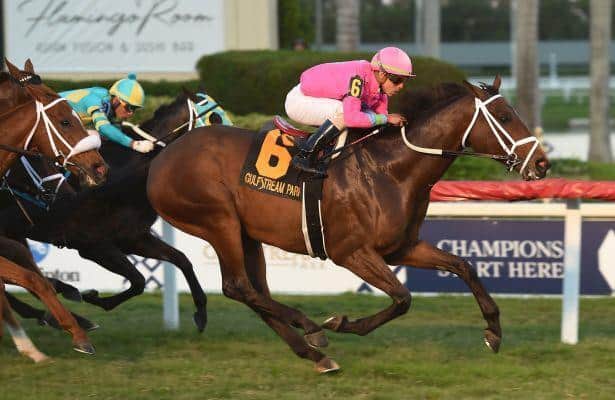 Hui sensed trouble when he saw that trainer Mike Maker was calling two weeks before his 7-year-old gelding was scheduled to compete in the $4 million Breeders’ Cup Turf at Keeneland. If there had to be a problem with any of the horses Maker trains for him, he remembers wishing it would be anyone other than Zulu Alpha.

His worst fears were quickly realized.

"You could have heard a pin drop when I answered it,” Hui said, “because he didn’t speak for a few seconds.”

The news was not very bad; the timing was horrendous.

Maker had arrived at the barn that morning to find slight swelling above Zulu Alpha’s left front ankle, the result of a small bruise. “You can speculate that he bumped it somewhere,” the owner said.

In an instant, a horse that had been remarkably sound since Hui (pronounced “hoy”) claimed him for $80,000 at Churchill Downs in September 2018 would not be able to dance the biggest dance. The Street Cry gelding had finished fourth in the 2019 Breeders’ Cup Turf at Santa Anita, beaten by just 1 3/4 lengths. More had been expected this time around.

“He was ready. He was kind of a horse for that course,” Hui said. “I was confident we were going to improve on our fourth-place finish the previous year, Europeans or no Europeans. It was in Mike Maker’s back yard.”

Zulu Alpha already had excelled at Keeneland, winning the July 12 Elkhorn Stakes (G2) at the Turf distance of 1 1/2 miles. Although Maker still found a way to win a Breeders’ Cup race when long shot Fire At Will scored in the Juvenile Turf, the European contingent capitalized on Zulu Alpha’s sudden absence with the one-two finish of Tarnawa and Magical in the Turf.

Zulu Alpha’s injury requires nothing more than rest to heal. He is getting that before he is expected to be reunited with Maker in South Florida in the second week of December to begin preparations for the $1 million Pegasus Turf on Jan. 23 at Gulfstream Park.

The son of seven-time graded-stakes winner Street Cry used the Pegasus to provide Hui with his first Grade 1 triumph last January. That served as a springboard to a season in which he also won the Feb. 29 Mac Diarmida (G2) at Gulfstream before placing second there in the March 28 Pan American Stakes (G2).

He rebounded from that disappointment by winning the Elkhorn before encountering extreme conditions that were not to his liking in the Sept. 12 Kentucky Turf Cup Stakes (G3) at Kentucky Downs. The connections considered scratching because of a torrential downpour that led to the course being labeled soft.

“It was a monsoon, but I’ve never seen a turf course deteriorate that quickly,” said Hui, who is from Little Rock, Ark. Zulu Alpha did well to salvage third for regular rider Tyler Gaffalione.

There is every reason to believe Zulu Alpha will be formidable as he looks to defend his title in the Pegasus Turf. He excelled after a similar layoff last year and relishes the going on Gulfstream Park’s lawn, winning four of six races on that course.

Few rivals can match his résumé. He owns 12 victories in 35 career starts with five runner-up finishes and six third-place efforts for $2,260,114 in earnings.

Hui envisions a similar schedule for Zulu Alpha in 2021 and looks forward to the year with considerable optimism. He emphasized, however, that he will not persevere if the horse should show signs of decline as an 8-year-old.