Domestic Spending gets up late in Hollywood Derby thriller 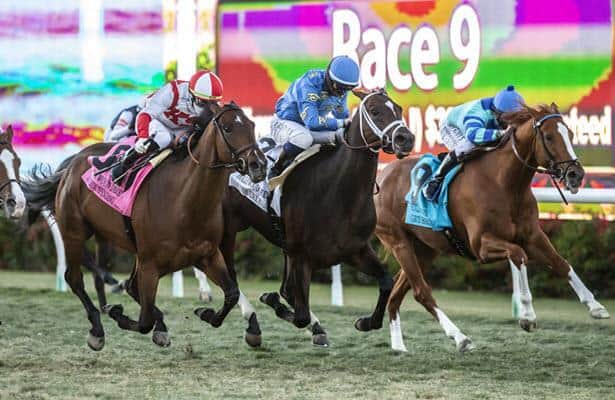 Eastern dominance at Del Mar's Turf Festival continued when Domestic Spending surged past local hope and race favorite Smooth Like Strait in the shadow of the wire to win the Grade 1, $300,000 Hollywood Derby on Saturday.

Domestic Spending, the 4-1 third choice in an 11-horse field, provided trainer Chad Brown and jockey Irad Ortiz Jr. with a second graded stakes win on the program after teaming with Fluffy Socks in the Jimmy Durante (G3) for 2-year-olds on turf. On Thanksgiving, Brown and Ortiz also won the Red Carpet (G3) with eastern invader Orglandes.

Domestic Spending was content to sit near the rear of the field during the early parts of the 1 1/8-miles trip as Get Smokin set a pace of 23.87, 48.23 and 1:12.38 with Smooth Like Strait stalking immediately to his outside.  Down the backstretch, Domestic Spending began to steadily pick off horses and continued to improve his position around the turn as the two front-runners maintained their positions.

Smooth Like Strait, who was bet down to 5-2 favoritism, finally got past a stubborn Get Smokin in mid-stretch and looked poised to give the home team a second Turf Festival win following Count Again's upset in the Seabiscuit (G2) two races earlier for trainer Phil D'Amato. It was not to be, however, as Domestic Spending came rolling down the middle of the course to get up and win by a head.

“I thought I was going to be closer with him, but he came out of there a little slow and we were in the back," Ortiz said. "I worked my way up on the backside and he was running perfect. When I asked him for his run at the three eighths (pole), he was ready. He really put in a nice kick. He’s been a little green in his earlier races but he’s getting better all the time.”

Smooth Like Strait just held off a fast-closing Gufo to maintain second with Get Smokin relegated to fourth. Domestic Spending paid $10.40 while completing the trip on firm turf in 1:47.15.

This was the second Hollywood Derby win for Brown, who also won it in 2018 with Raging Bull.

Domestic Spending, who was exiting a win in the Aug. 20 Saratoga Derby, improves to 4 for 5 with more than $500,000 in earnings for Klaravich Stables. Bred in Great Britain, he is by Kingman out of the Street Cry mare Urban Castle. He was purchased for $412,430 at the 2018 Tattersalls October yearling sale.

“Three down, one more to go," said Jose Hernandez, Brown's assistant. The barn also has runners in Sunday's Matriarch.

"I talked to Chad coming over to the paddock and he just said stay with the plan. He broke a little slow but he was in good position and at about the half-mile point he started picking it up and by then I knew he was going to be there at the end," Hernandez added. "He’s a really good horse. ”