Doctor J Dub has Turned Around for Claiming Crown 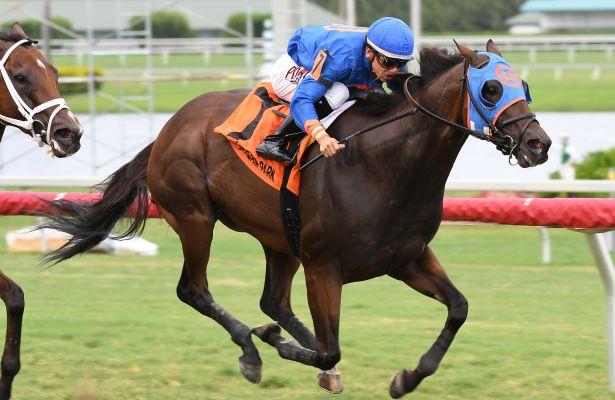 Doctor J Dub had already raced 19 times with four wins, all in South Florida, by the time he joined trainer Jena Antonucci’s string at Gulfstream Park in May. As the 6-year-old gelding began to get comfortable in his new surroundings, he found himself becoming the barn favorite.

“Since we got him, he’s a completely different horse. It’s hard to even explain really. He was kind of shut off and stayed in the back of his stall and a kept a little bit more to himself,” Antonucci said. “Now he’s out in front of his stall and he’s got a lot of sass and personality and he knows he’s king of the barn. We definitely tell him how special he is all the time. He’s just a cool dude. He’s got a swagger about him.”

Doctor J Dub had only run once in a stakes race before being sent to Antonucci by owner Drawing Away Stable after he went winless in seven starts for Maria Borell, who claimed him away for $16,000 on New Year’s Day.

The son of Sharp Humor ran fourth in the Bonita Stakes June 4 and four weeks later captured the Bob Umphrey Turf Sprint. Antonucci then brought him to Saratoga, where he hit the board twice in three optional claiming allowance starts at the prestigious summer meet.

From there, Antonucci pointed Doctor J Dub to the Turf Monster (G3) Sept. 5 at Parx, where he sprang a front-running half-length upset at odds of nearly 24-1 defeating such multiple stakes winners as Power Alert, Two Notch Road and Bold Thunder.

It was the first graded stakes triumph for Antonucci, who has won 90 races since 2010.

“It’s kind of hard to really put into words, to be honest. It’s pretty cool to watch a horse come into your program and watch him change in front of your eyes and buy into the program and buy into you as a person and trust and believe in you,” she said. “He’s always been kind of speed-favoring anyway, and to just to see him dig and fight that little extra more you like to feel like it was because of the scene around him and him being a truly happy horse that he’s flourishing.”

“We think he’s tight enough. I don’t really have anything where I can tell you I wish we were doing this or that. We’re pretty happy with where he is,” Antonucci said. “I don’t expect him to be the big favorite. I think people will look down on his last race a little bit, but that’s fine. The odds board is not going to matter to him. He’ll run his race and hopefully he’s good enough on Saturday.”

Returning Champion Royal Posse a ‘Jewel’ of Consistency: Royal Posse hasn’t finished worse than second in 13 consecutive races since being claimed by Michael Dubb, Bethlehem Stables and Gary Aisquith on May 21, 2015, counting a triumph in last year’s $200,000 Claiming Crown Jewel at Gulfstream Park among his six stakes victories.

The Rudy Rodriguez-trained 5-year-old gelding, who romped to a 2 ½-length victory over a sloppy track in the centerpiece of the nine-race $1.1 million Claiming Crown last year, has returned to Gulfstream to defend his title in the 1 1/8-mile highlight of Saturday’s Opening Day of the 2016-2017 Championship Meet.

“We knew he loved a sloppy track, and it was a very sloppy track. I think he’ll be very competitive, but the race looks a little deeper than last year,” the New York-based Rodriguez said, “Some of the horses in the race look very solid, but I wouldn’t trade places with anyone, that’s for sure.”

Royal Posse will be joined by Moonshine Promise ($110,000 Glass Slipper) as returning champions from 2015, while Goodtimehadbyall, the 2013 Rapid Transit winner, returns to Gulfstream for the $110,000 Iron Horse.

The son of Posse has been installed as the 7-5 morning-line favorite in a field of nine horses that raced for a claiming price of $35,000 or lower at least once.

“Since we’ve claimed him, he’s been very sound and he’s been very consistent. We try to keep him happy. I have to thank the owner for letting us run the horse when we want to run him,” Rodriguez said. “He’s an unbelievable horse to be around. We got lucky at the right time.”

Class and Cash Takes Win Streak into $125,00 Emerald: Edward J. Short’s Class and Cash, first or second in seven straight starts dating back to early March, will put his two-race win streak on the line in Saturday’s $125,000 Claiming Crown Emerald.

Claimed by trainer Jane Cibelli for $16,000 out of a neck loss March 4 during last winter’s Championship Meet, the 4-year-old Exchange Rate gelding has been a model of consistency for his new connections.

He has won four of six starts and came up a nose short of a fifth victory in a 1 1/16-mile optional claiming allowance July 1 at Laurel Park. He came back to win a similar spot two starts later Sept. 4 at Parx, and followed with a three-quarter length allowance triumph on the front end Nov. 6 at Gulfstream Park West in his most recent effort.

“He’s doing very well. I breezed him the other day on the turf and he was unbelievable. He went in 47 [seconds] and change and he’s just doing very, very good right now,” Cibelli said. “The nice thing about that horse is that he looks like he needs the lead, but he really doesn’t. If you look two races back he did sit off the pace so it’s not like he has to be on the lead, but we’ll see how it plays out.”

Class and Cash had primarily been a turf sprinter before joining Cibelli, who has run him around two turns in each of his last five starts. He is 3-for-4 at the Emerald’s 1 1/16-mile distance.

“When I claimed him, I did claim him with the thought that he had never run long. They had run him on the turf short and he was always running on the end of it,” she said. “Like anything it’s just a gamble, and sometimes it pays off and sometimes it doesn’t. I wondered what would happen if he ran long and luckily for me the gamble did pay off. He runs very well going long. It worked out, but it doesn’t always work out that way.”

Trainer Jane Cibelli said the 7-year-old Mizzen Mast gelding emerged well from the Tropical Turf, where he was on the lead when he suddenly ducked out in mid-stretch as Lubash was making a bid on his outside. The incident happened just past the end of the inside edge where the 1 1/16-mile chute joins the turf course.

Rose Brier hit the wire 1 ¼ lengths in front, but after an inquiry and jockey’s objection was placed second behind Lubash. He was third, beaten a length, in the Red Bank (G3) this summer at Monmouth Park after finishing fourth in that race in 2014 and 2015, and was also fourth in the 2015 Tampa Bay Stakes (G3).

“He came out of the race so well, and if any horse deserves to have a graded stake beside his name, he does. He’s run against some big horses and beaten them and run well with them. He’s as consistent as they come,” Cibelli said. “I’m not in disagreement. He did come out, no doubt about it. He came up to where the hedge stops and he ducked out from that. He did bother [Lubash] and you can’t argue that fact, but I don’t think [Lubash] was ever going to go by him and that’s what the heartbreaker is.

“If [Lubash] was closing on him and looked like he was going to go on by him, then you say, ‘Well, we were going to get beat anyway.’ But you’d almost rather run last than get beat like that. It’s heartbreaking. I knew when he crossed the wire. The groom’s doing a happy dance and so was my assistant, but I said, ‘Guys he’s coming down.’ What can you do. It is what it is.”

Rose Brier won his lone start at last year’s Championship Meet, a 1 1/16-mile starter optional claimer on the grass. It was his second of three straight wins and first race in six months off following a winter break.

“I think what we’re going to do is point him to the Ft. Lauderdale and we’ll see what nominates to that. The next race would be the [G3] Harlan’s Holiday [Dec. 17] but that’s really close and, honestly, I think he runs better when you give him six weeks,” Cibelli said. “He just runs better if you give him time. We’ll look at the Ft. Lauderdale and see how it comes up. If it comes up where he fits then we’ll run and if he doesn’t fit then we won’t. I do want to give him some time off before we head back up north.”

Claiming Crown Gives Horses, Horsemen Day in the Sun: Since going out on her own in 2014, trainer Kelly Rubley has spent the winters stabled in South Florida. This year she’s staying put at the Fair Hill Training Center in Maryland, but will be at Gulfstream Park this weekend for the 18th Claiming Crown.

It marks the Claiming Crown debut for Rubley, a former schoolteacher in central New York who had previously worked as an assistant to trainers Barclay Tagg and Jimmy Toner.

“This will be my first year. To be honest, every year I’ve tried to have a horse for the Claiming Crown and this year I have two that are eligible and I think actually fit in the fields that we’re going for,” she said. “I’m very much looking forward to opportunity. This is the first year that I’m not shipping to Florida for the meet, so it will be nice to have a little break in the sun.”

The Claiming Crown was created in 1999 to honor the blue-collar horses that are the foundation of the racing industry nationwide. It offers the less-heralded horses and horsemen a chance to run for larger purses and recognition.

Like Rubley, Chuck Simon is starting his first horse in the Claiming Crown, Miesque’s Approval Stakes winner Aire Bueno in the Emerald. The veteran trainer relocated to South Florida full-time two winters ago after nearly two decades on the New York, Mid-Atlantic and Midwest circuits.

“It’s a nice purse and it’s a great day of racing. It kind of rewards the horses that fill the weekday cards, the old warriors, the owners that support racing that don’t have the million-dollar horses but are always looking to find a horse that might improve into a good horse,” Simon said. “It’s a good program. Obviously it’s been around for a while now and I think Gulfstream is a good fit for it. It’s kind of a culmination of the year. They used to have it earlier in the year but now it’s almost like an end of the year prize. It gives Gulfstream a nice way to open the meet.”

Doctor J Dub has run 27 times with six wins, and the Turf Monster was his and Antonucci’s first graded stakes victory.

“I think it’s great to be able to showcase these horses. They’re the backbone of the industry,” she said. “Every trainer would love to have a barn full of stakes horses but that’s nearly impossible. Even the best trainers have a mixed group of horses. Something like this allows the backbone of the industry to have their moment to be in the headlines. They’re so deserving.”