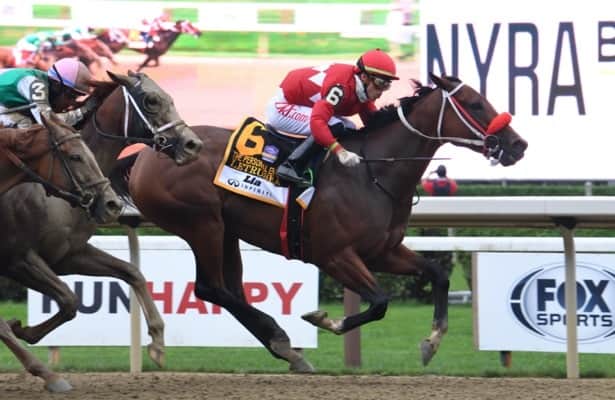 St. George Stable’s Letruska, who has firmly established herself as the leading mare in the land, heads a field of seven fillies and mares entered Thursday for Sunday’s 66th running of the $500,000 Spinster Stakes (G1).

Trained by Fausto Gutierrez, Letruska has had her Breeders’ Cup ticket punched three times by virtue of victories in the Ogden Phipps (G1), Fleur de Lis (G2) and Personal Ensign (G1). Prior to the Ogden Phipps victory, Letruska started her four-race win streak with a nose victory over champion Monomoy Girl in the Apple Blossom (G1) in April at Oaklawn Park.

Since taking the Personal Ensign on Aug. 28, Letruska has had two bullet works at Keeneland. Irad Ortiz Jr. has the mount Sunday from post position four.

Back to challenge Letruska from the Personal Ensign are Juddmonte’s Bonny South and Peter Brant’s Dunbar Road.

Trained by Brad Cox, Bonny South has been a runner-up twice to Letruska. She came up 2 3/4 lengths short in the Ogden Phipps and was a half-length shy in the Personal Ensign. Winner of the Doubledogdare (G3) here this spring, Bonny South will be ridden Florent Geroux out of post position two.

Dunbar Road finished fourth in the Personal Ensign, beaten just three-quarters of a length. Trained by Chad Brown, Dunbar Road was third in last year’s Breeders’ Cup Distaff here. In her only other Keeneland start, she ran third in the 2019 Juddmonte Spinster.

Dunbar Road will exit post one under jockey Flavien Prat.

*Rating is based on HRN fan votes, which rank the Top Active Horses in training.
Letruska Spinster Spinster (2021)