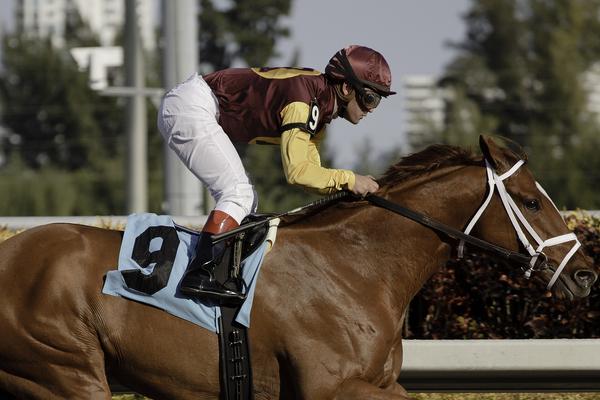 The Grade 1, $400,000 Carter Handicap at Aqueduct Racetrack will serve as the New York debut for Discreet Dancer, who has won four of five career starts, all at Gulfstream Park.

The seven-furlong Carter was carded as the tenth race on Saturday’s Wood Memorial card. Post time for the Carter is scheduled for 5:49 p.m.

Discreet Dancer, a 4-year-old, was never asked for his best run in his most recent effort, a 5 ¼-length romp in the Grade 2 Gulfstream Park Handicap on March 9. It was a step forward off his 2013 bow, a neck victory in an optional claimer on February 6.

His lone career loss came in his 2012 finale, when he was third in the Grade 2 Fountain of Youth, his only start beyond one mile.

Discreet Dancer, an E. Paul Robsham Stables homebred, will be cutting back from one mile in the Gulfstream Park Handicap to seven furlongs in the Carter. He’ll breaking from the outside in the Carter, which drew a field of seven.

“We hope that he’s as good elsewhere as he is at Gulfstream,” said trainer Todd Pletcher. “He’s always trained very well at Palm Meadows, and we’re optimistic he’ll handle just about any surface. We really like the post position. Anytime you’re going seven furlongs you’d love to not be on the inside, and the relatively short field gives us all the options.”

On Sunday, Discreet Dancer turned in his final workout prior to the Carter by breezing five furlongs in 1:01.17 in company with Wood Memorial morning-line favorite Verrazano at Palm Meadows.

“His last work was consistent with the way he’s been training this winter,” said Pletcher. “He and Verrazano have been workmates on occasion; they seem to do well together. It was a similar work to what we saw prior to the Gulfstream Park Handicap.”

Javier Castellano will ride Discreet Dancer, who was installed as the 8-5 morning-line favorite and assigned 118 pounds.

Like Discreet Dancer, Sahara Sky will be making his first start in New York, having made 13 straight starts in Southern California. He was undistinguished through his 4-year-old season, with his best win being a neck victory last May at Betfair Hollywood Park.

Given time off following a fourth in an allowance in June, Sahara Sky has made a gigantic leap forward during his 5-year-old season. Returning in the Grade 2 Palos Verdes in January at Santa Anita, he rallied from off the pace to win by a length at 21-1. He subsequently validated that score when he employed similar closing tactics to take the Grade 2 San Carlos by three-quarters of a length on February 23, also at Santa Anita.

“Last summer, he got real body sore down at Del Mar, and we just gave him a little time out, and he came back running for us and then won two big races in a row for us at Santa Anita,” said Hall of Fame trainer Jerry Hollendorfer, who owns Sahara Sky in partnership with Sweetwater Stable. “So we’ve learned with him to space his races out and when he needs time, to give him the time. He’s a lovely horse and I’m looking forward to running him in New York, although I think that’s going to be a pretty tough race, in my opinion.”

Joel Rosario, who rode Sahara Sky for four starts in 2011, will be reunited with the 2-1 morning-line second choice. The 120-pound highweight drew post 4.

Swagger Jack and Fort Loudon, second and third, respectively, in the Gulfstream Park Handicap, will face Discreet Dancer again in the Carter.

Fort Loudon defeated Swagger Jack by a half-length in the Grade 2 Gulfstream Park Sprint Championship at seven furlongs in February and gave way late after contesting the pace from post position 2 in the Gulfstream Park Handicap. The Jacks or Better Farm homebred drew post 2 once again in the Carter.

“I wish he had drawn outside, but he’s a good horse and he’ll fight hard,” said Hall of Fame trainer Nick Zito, who won last year’s Carter with Jackson Bend. “Seven-eighths is his distance. We’ll see what happens.”