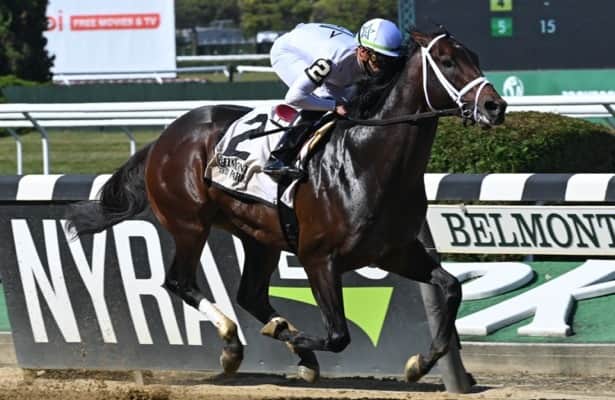 Hall of Fame trainer Todd Pletcher said he saw just what he had hoped from talented 3-year-old Life Is Good, who secured a third graded stakes victory when defeating elders in Saturday’s Grade 2 Kelso over a one-turn mile at Belmont Park.

The son of leading sire Into Mischief was never in doubt throughout the journey, commanding the compact field through every point of call under Irad Ortiz Jr.’s expert engineering and glided home a 5½-length winner.

Life Is Good garnered a 99 Beyer Speed Figure for the win.

“We were very pleased with he way he ran. He seemed to settle pretty nicely,” said Pletcher. “He got into a good rhythm and Irad asked him at the top of the stretch to go along and he did. He dropped right down to the rail, and I was happy with it.”

Pletcher said Life Is Good, owned by CHC Inc. and WinStar Farm, is a likely candidate for the Breeders’ Cup Dirt Mile on Nov. 5 at Del Mar.

Favored in all five of his career starts, Life Is Good was an impressive three-time winner in California while racing for Hall of Famer Bob Baffert, including victories in the Sham (G3) on Jan. 2 and San Felipe (G2) on March 6, both at Santa Anita. He returned to action in the H. Allen Jerkens Memorial (G1) on Aug. 28 at Saratoga where he was a game second to Jackie’s Warrior.

Pletcher took a similar route with 2011 Kelso winner Uncle Mo, who was second in the H. Allen Jerkens (then run as the King’s Bishop) off a layoff en route to an in-hand Kelso score.

“I’ve thought about that, they both were coming back in the same two races off a layoff,” Pletcher said. “They were both talented horses and have speed and ability to carry it over a distance. They were two super star horses.”

Pletcher could arrive at the Breeders’ Cup Dirt Mile with at least two solid contenders after Mind Control displayed a game effort in the Parx Dirt Mile at its namesake track Saturday. The 5-year-old Stay Thirsty bay registered his first triple-digit speed figure in 23 lifetime starts, garnering a 104 Beyer when fending off Metropolitan Handicap (G1) winner Silver State in deep stretch to win by a head.

A graded stakes winner in four straight years, Red Oak Stable and Madaket Stable’s Mind Control made his first start going two turns since finishing a distant seventh in the 2018 Breeders’ Cup Juvenile at Churchill Downs. Nevertheless, Pletcher said he was confident that two turns would not be out of reach.

“He was game,” Pletcher said. “That other horse (Silver State) looked like he had him, but he fought right back. It was good to see him get the win. We thought he would handle two turns and we were happy to see him do it.”

“I have to talk to (Red Oak Stable racing manager) Rick Sacco. He wanted to run in the Parx Mile to see where we are,” Pletcher said. “I’ll give it a few days, talk with Rick and come up with a game plan.”

Mind Control, an earner of over $1.4 million, has won all six of his graded stakes scores at NYRA tracks. Following his juvenile season in 2018, which saw Mind Control garner an upset score in the Hopeful (G1) at Saratoga, he secured victories in the Bay Shore (G3) at Aqueduct before a triumphant return to the Spa in the H. Allen Jerkens Memorial while racing for trainer Gregg Sacco.

After earning Grade 3 wins at Aqueduct in the 2020 Toboggan and Tom Fool, Mind Control snapped an eight-race losing streak in his debut for Pletcher in the John A. Nerud.