Diminutive Cambria goes from Presque Isle to the Breeders' Cup 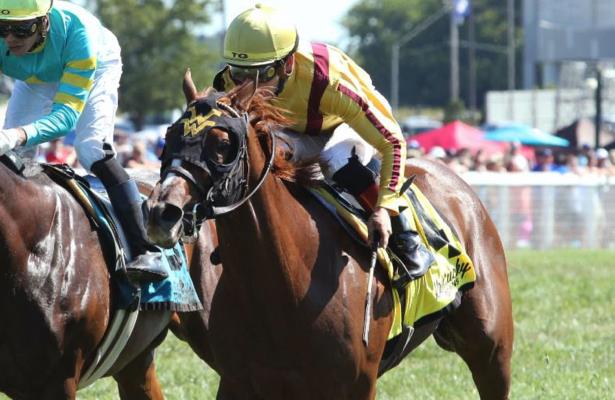 Photo: Coady Photography
With the Breeders’ Cup just three weeks away, trainer Wesley Ward appears to once again be heading into the championship weekend with a plethora of talented 2-year-olds. Which specific races all of Ward’s charges will compete in has yet to be finalized, but a destination's set for one of his stakes winners.
Stonestreet Stables’ Cambria, a Speightstown filly undefeated in three starts, most recently captured the Kentucky Downs Juvenile Turf Sprint in early September.

Ward often unveils his more precocious juveniles during Keeneland’s spring meet. Several of those youngsters then compete at the prestigious Royal Ascot meet in June.

However, Cambria has traveled a slightly different path to get to the Breeders’ Cup.

“I didn’t think it was the right time to push her…being so small, so I just kind of wanted to let her come into herself,” Ward said this week in an interview with the HBPA. “What I’ve seen in the mornings, I just didn’t see a filly that could win at Belmont or Keeneland early on.”

Instead, Ward sent Cambria to Presque Isle Downs with the hopes of finding an "easier" spot in which to make her first start. The venture was a successful one, with Cambria taking a 4 1/2-furlong maiden special weight contest by 1 1/4 lengths on May 20.

"She won, not ultra impressive, but it was a really nice race," Ward said.

From there, Ward was thinking stakes.

"We just really didn't see anything good," he said. "Another opportunity came up at Presque Isle.

Given plenty of time to recover, Cambria didn’t make her next start until July. That time Cambria took a 5 1/2-furlong allowance with relative ease.

It was during that second race that Cambria, with the help of jockey Mario Pino, debuted a new running style – dropping back and coming with one big run.

"She won very, very impressively and settled really, really nice," Ward said. "So I thought I'd kind of take her and go with that style of running. In the mornings, we started letting her settle and come with runs."

After that victory, it was time to try stakes company, and Ward circled the Kentucky Downs Juvenile Turf Sprint at the first part of September for the filly’s next start. Not only would Cambria be trying 6 1/2 furlongs for the first time, she would also be taking on colts.

Despite those new challenges, Cambria passed the test with flying colors, defeating Chimney Rock by a stubborn head after showing herself ahead of race day with what Ward called an "eye-opening breeze."

It was impressive enough that Ward texted Stonestreet's Barbara Banke indicating Cambria had "a big chance" at Kentucky Downs.

"She showed a lot of heart and grit and determination," Ward said. "She kind of fought hard for a little tiny filly that she is. She held off that big colt on the outside and prevailed."