Dickey: Kentucky Derby loses none of its luster in September 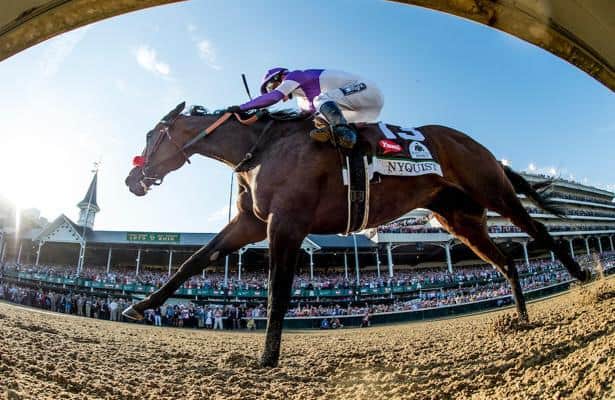 With the official news in Tuesday that 2020 Kentucky Derby is now scheduled for Sept. 5, social media was rife with opinions regarding the importance of the “Run for the Roses” outside of the traditional first Saturday in May.

Wanting fans in the stands for its signature race, Churchill Downs had no choice but to postpone the Derby amid the coronavirus pandemic.

But some argue that because 3-year-old Thoroughbreds are much more mature in September than in early May, the Kentucky Derby loses some of its luster. I disagree.

The Derby will still be the same premier race restricted to 3-year-olds going a mile and a quarter on the dirt, as it is every year, regardless of when it is run. The date does not diminish the accomplishment.

MORE: A fall Triple Crown's in the works

Prominent owners and trainers echoed that in the wake of Tuesday's announcement.

Jack Knowlton, principal of Sackatoga Stable, which campaigns one of the early Kentucky Derby favorites Tiz the Law, also has the experience of winning the 2003 running with Funny Cide.

“Let’s be honest: Winning the Kentucky Derby is the be-all and end-all in Thoroughbred horse racing,” Knowlton said. “Everybody who has ever participated in the game at any role -- owner, trainer, jockey -- that’s the race they want to win. Whether it’s the first Saturday in May or the first Saturday in September, I don’t think it matters.”

Trainer Mark Casse, whose Enforceable leads Saturday's Louisiana Derby (G2), won two-thirds of the 2019 Triple Crown with War of Will in the Preakness Stakes and Sir Winston in the Belmont Stakes.

It's the Derby, however, that Casse has been chasing almost all his life.

“When I was 8 years old, they did a TV show on my brother and I and they asked me what I wanted to do when I got older and I said I wanted to win the Kentucky Derby," Casse said. "That hasn’t changed.”

Jack Wolf, head of the Starlight Racing partnership, said Tuesday that “I don’t think (the Derby) will lose any luster. Maybe it will be the Derby everyone remembers.”

Wolf still has reason to be optimistic about a September running, even though he has current sophomore stars Authentic and Charlatan cranking up for the would-be May 2 date. Charlatan, a 2-for-2 allowance winner receiving comparisons to Justify, still needs his points, same as Eight Rings, another horse run in partnership by Starlight.

“It’s disappointing because this is what we point to every year,” Wolf said. “This year we have three that are on schedule, but only one has the qualifying points at this point. I would guess that Charlatan would probably qualify in the next race.”

Trainer Bret Calhoun, who saddles Mailman Money in this Saturday’s Louisiana Derby (G2), is another who said he'll take a Kentucky Derby victory -- on any date.

“It’s really a change because you’re going to open the door for some later-developing horses,” Calhoun said. “There could be some better horses down the road. But I don’t think the Derby loses any of its luster.”

So all these horsemen will now circle a different date in the calendar. Some may make it there with a different horse than they would in May, as Churchill will add points to some existing summer stakes for 3-year-olds.

Late August was again anticipated for this year's Travers Stakes (G1), affectionately known as the Midsummer Derby. The summer schedule isn't yet out for Saratoga, allowing for some spacing to the Derby.

“For me personally, being a Saratoga guy, unfortunately with us missing the chance to run in the Travers with Funny Cide, I was looking forward greatly to the opportunity to run in the Travers this year,” Knowlton said. “I’m hoping beyond hope that the powers that be at NYRA and New York State are flexible enough to make sure the Travers is run at least four or five weeks before the Kentucky Derby this year.”

The Travers is a great race. It is not the Derby.

“If somebody asks me what I do, I tell them, ‘I’m a horse trainer,’” Casse said. “The first thing they ask after that is, ‘Have you ever won the Kentucky Derby’? They don’t ask whether you’ve won the Breeders’ Cup or the Travers. They ask about the Kentucky Derby.”

This year's edition may be unique in many ways, but it's no less of a challenge, and perhaps a more exciting race considering the circumstances.

“There are going to be more horses that will be in play that wouldn’t have been," Knowlton said. "Personally, am I happy about that? No. The fact is, in every race, you have to face whoever shows up.”

“Maybe our guy gets better and better with time too. Nobody knows. There are a lot of questions but there aren’t an awful lot of answers.”