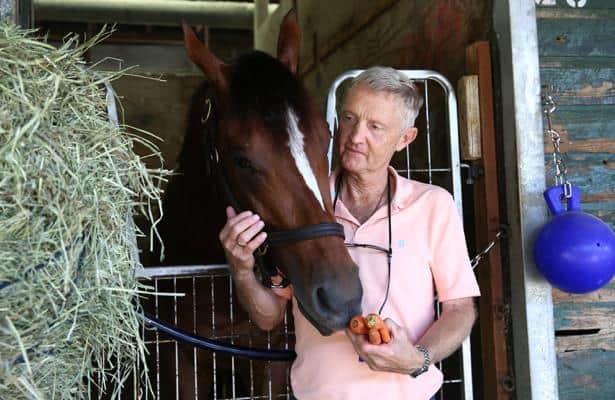 Twenty-seven horse racing industry participants, including trainers Jason Servis and Jorge Navarro, were indicted Monday for illegally doping racehorses and along the way "routinely defrauded and misled government agencies" along with "the betting public."

Citing that racing is a $100 billion global industry, documents from the U.S. District Attorney's Office of the Southern District of New York list 27 names, with Maximum Security conditioner Servis and Navarro, a leading name in south Florida, chief among them.

The District Attorney's Office laid out its claims in four documents, connecting veterinarians who provided blood doping agents to the trainers who concealed their use as part of a wide-ranging "scheme."

Servis, according to the documents, is alleged to have provided a performance enhancing drug "to virtually all of the racehorses under his control." SGF-1000, which contains "growth factors," is the substance named in the indictment connected to Servis, who allegedly used fake prescriptions to conceal its use. On or around last June 5, investigators found, Servis had a veterinarian falsify records to prevent a positive test for SGF-1000 on Maximum Security, who since then was named champion 3-year-old and on Feb. 29 won the $20 million Saudi Cup.

Navarro, who has conditioned, among others the Dubai Golden Shaheen (G1) winner X Y Jet, "orchestrated a widespread scheme of covertly obtaining and administering various adulterated and misbranded PEDs to the racehorses under his control," according to the indictment. Navarro "personally administered various adulterated and misbranded PEDs to X Y Jet," who died suddenly in January of what the trainer had said was a heart attack.

“Today’s unsealing of four indictments for widespread doping of racehorses is the largest ever of its kind from the Department of Justice," said Manhattan U.S. Attorney Geoffrey S. Berman said. "These defendants engaged in this conduct not for the love of the sport, and certainly not out of concern for the horses, but for money.  And it was the racehorses that paid the price for the defendants’ greed.  The care and respect due to the animals competing, as well as the integrity of racing, are matters of deep concern to the people of this District and to this Office.”

Release of documents followed reported Federal Bureau of Investigation stings at the Palm Meadows Training Center and Gulfstream Park West in south Florida, where Servis and Navarro stable many of their horses during the winter.

In a statement, The Stronach Group, which owns both properties, said it "complied fully with the search warrants that were executed by federal authorities this morning. The warrants issued were specific only to the barns and stalls that were occupied by the individuals charged today.

"The Stronach Group is not included in the charges."

Servis and Navarro conversed on performance-enhancing drugs, according to the indictment, such as on or around Feb. 19, 2019, when Servis texted Navarro warning him of a racing official near where they stored the substances. In an intercepted call Navarro made later that day to another party, Navarro said, "He would've caught our asses f------ pumping and pumping and fuming every f------- horse (that) runs today."

Throughout the years, Servis has vehemently denied cheating, including in a July 2018 interview with Horse Racing Nation.

“People are talking a lot of shit,” Servis said while on a winning streak, “and I’m really not happy about it.”

Kentucky Derby-winning trainer Graham Motion, a staunch advocate for drug-free racing, tweeted after the documents were released that this is "a sad day for racing but a long time coming. A good day for those who try to play by the rules, we will all be better for it."

Documents detailing the charges against Servis and Navarro are available below: