Devamani gets breakthrough win for Brown in Knickerbocker 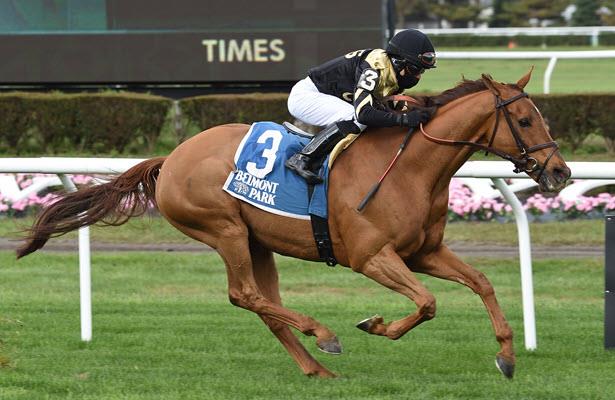 Sanford J. Goldfarb and Samuel Abraham's Devamani came within a neck and nose, respectively, of notching his first graded stakes win this year. On Sunday, the French-bred broke through, overtaking pacesetter En Wye Cee in the stretch and drawing away to a two-length victory in the Grade 2, $150,000 Knickerbocker for 3-year-olds and up at Belmont Park.

Devamani, who ran second by a nose to Admiralty Pier in the Grade 3 Tampa Bay in February and by a neck to Instilled Regard in the Grade 2 Fort Marcy in June over the Belmont grass, fended off stablemate Olympico's late charge to complete the 1 1/8 mile journey over the yielding inner turf course in 1:51.78, giving trainer Chad Brown the exacta for the five-horse field.

Out of the gate, En Wye Cee broke sharp from post four and led the field through the opening quarter-mile in 25.66 seconds, the half in 51.13 and three-quarters in 1:15.58 with Devamani tracking in third position under jockey Joel Rosario.

Through the final turn, Devamani, who had plenty in reserve, pressed on from the outside, taking command in the final furlong and powering home to his first victory in six starts this year.

"He's a neat horse. He's a very well-bred horse. He's always been at the top of his game in his training, his looks and such," said Brown, who took over training duties for the 6-year-old Dubawi gelding starting for the current campaign. "Obviously, he took to our program well right away and we had him running in stakes right away. He's a very useful horse and he'll be exciting to have as a 7-year-old here next year.

"This horse has a pedigree to get better when he gets older," he added. "I'm not shy to run 6, 7 or 8-year-olds on the turf. Sometimes, they find their feet there. I'll talk to the ownership group and see, but this horse is running super. We may run him one more time [this year] or we may not. But I'm looking to run him as a 7-year-old."

"He was just there for me and was able to go along early and he kept going," Rosario said. "To be up a little closer with the slow pace, he was on his game. He always runs hard. He had been unlucky a couple of times and he got the job done today."

Brown put blinkers on Devamani for the first time in his previous start when third in the Lure on September 7 at Saratoga and removed them for Sunday's contest.

"Joel really rode him perfect," Brown said. "We got the position we were looking for with him. We put the blinkers on him because he was falling so far out of position in his races and it didn't really work out. He wasn't happy with them. When we took them off, what it left us with was a little sharper horse. Putting them on and taking them off, even though we took a defeat last time, might have been the final piece of the puzzle for this horse just to put him in the race a little bit."

Fellow French-bred Olympico edged En Wye Cee by a neck for second, marking the second consecutive year he finished as the Knickerbocker runner up.

"He was second-best. The winner got a perfect trip," said Olympico jockey Irad Ortiz Jr. "He ran a perfect race, he just got beat."

Olympico was making just his third start of his 5-year-old campaign and posted his first overall on-the-board effort since last year's Knickerbocker.

"He was a little out of position. I thought he would be ahead of Devamani early, I was surprised they flip-flopped," Brown said. "Irad thought he gave him a good run. Fortunately, he was able to squeak out second there."

Breaking the Rules, the 2-1, favorite, finished fourth, with Seismic Wave completing the order of finish.