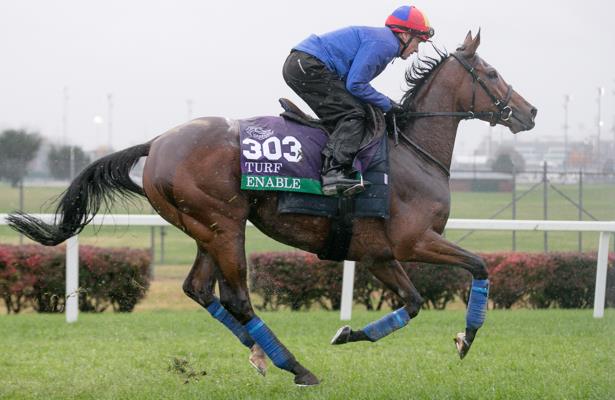 British horse racing resumes next month, and so too could the racing career of Enable, who has remained in training for a 6-year-old season.

In a conversation Sunday with broadcaster Nick Luck, jockey Frankie Dettori said Enable may be first seen at Royal Ascot, or perhaps in the King George VI And Queen Elizabeth Stakes (G1) that she won in 2019.

"The main aim is trying to get her to the first Sunday in October,” Dettori said, meaning a try at a third career Prix de l’Arc de Triomphe win, “in the best shape we can get her to try to do something that no horse has done in Arc history.”

Prince Khalid Abdullah’s star mare was last seen in the 2019 Arc when tracked down late by Waldgeist at Longchamp. To some surprise, connections decided to bring her back for a swan song campaign with Enable 13-for-15 overall, including Arc wins in 2017 and 2018.

Dettori is the top rider for John Gosden, who trains Enable.

“She looks magnificent,” the jockey told Luck. “Sometimes you’re afraid that when a horse is getting old, they might lose the racing brain. But she seems very alert and struts around the place like she owns it. She’s very fresh and alert and that’s a good sign.”

Racing is allowed to restart in Britain on June 1. The first weekend will feature the 2,000 and 1,000 Guineas for 3-year-olds before Royal Ascot takes place June 16-20. As in America, racing will be conducted spectator-free.

Here are the latest movers in our 2021 Kentucky Derby rankings
Impressive recent wins from Life Is Good, Red Flag...