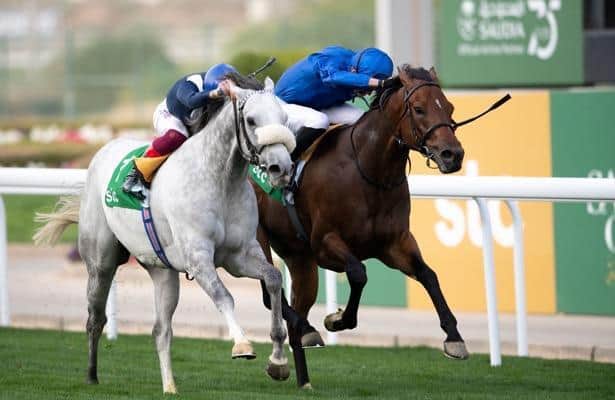 It wouldn’t be a major international racing event without Frankie Dettori making his presence known.

The Italian jockey scored his first victory of Saudi Cup Saturday when pointing Dark Power to a late charge in the $1 million 1351 Sprint Cup at King Abdulaziz Racetrack.

Dettori kept the 6-year-old gelding Dark Power a few lengths off the pace setter Mubtasim through the turn of the roughly 6 1/2-furlong turf sprint.

Dark Power came three-wide into the stretch and put away two rivals before zeroing in on the leader. Dettori pushed the 27-1 longshot at just the right time, and he scored by a head.

Dark Power returned $57.40 to win, followed by Mubtasim in second and 9-5 favorite Glorious Journey in third.

Dettori will look to pull another major upset later Saturday when Gronkowski, 30-1 on the morning line, runs in the $20 million Saudi Cup.

The 1351 Sprint Cup featured two American-based runners, the Peter Miller-trained Ghoul and Legends of War from the Doug O’Neill barn. Legends of War ran sixth of 14, with Ghoul in eighth.