Desormeaux 'ecstatic' that injury was not serious 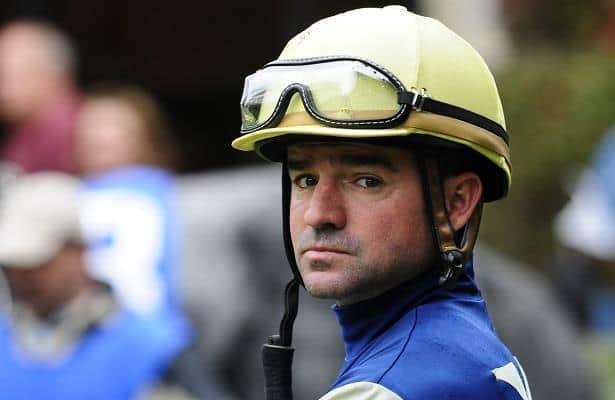 Hall of Fame jockey Kent Desormeaux does not know when he will be able to return to riding after being injured in a spill on Saturday, but he doesn't expect it to be long.

Desormeaux was riding Scat's Choice in the fifth race at Santa Anita on Saturday when she broke down. The 3-year-old filly was euthanized, the first racing fatality at the track since 2019.

In an interview on Monday with HRN, he said he initially was told he had a fractured rib as well as fractured vertebraes. It turns out that there was no rib injury: "Those were old fractures that they saw."

He said doctors have not given him a time frame for his return.

"They said I can return as soon as I can deal with the pain. It’s a pain-management situation. As soon as I’m capable of performing my duties, I can return."

He does not expect that to be very long, judging from his past injuries. "A completely broken arm was six weeks, so I can’t imagine that this — it doesn’t hold any weight. It doesn’t serve any purpose, it’s not binding. It’s just there to protect my innards. And it served its purpose, because I have no interior bleeding or anything. So the vertebra that is cracked actually did its job."

Desormeaux said he was immobilized Saturday night but then made a quick turnaround.

"One of my sisters is a nurse, and she instructed me what care I should go under. … And with just one overnight of rest, I went from being immobilized to being able to move around. So something must have been pinched. Once the swelling went down, I was much more capable."

Desormeaux took a five-month absence from racing to participate in a rehabilitation program to overcome substance abuse. He returned to racing at Santa Anita the day after Christmas.

He acknowledged that the setback came at a time when his momentum on the track was picking up.

"I had attained several new calls that were from different barns that hadn’t jumped on board yet, and they were ready to play. So was I!

"So now it’s one of those things where people want to see you," he said. "And I give a tremendous amount of gratitude to those who’ve already ridden me. It’s always a wait-and-see attitude, and the ones that give you those first rides are putting a lot of trust in that. Once they see the white in your eye on the ground and you’re performing as you can, then that’s when you get the momentum switch. So hopefully I’ll be able to show that I’m capable again before I can even get calls and they’ll have trust that when I return I’m truly ready to go."

Despite that disappointment, Desormeaux knows the injury could have been much more serious.

"Quite honestly, after Saturday night, I’m ecstatic. I feel like some miracle happened Saturday night, someone’s prayers were answered. Maybe all my family and loved ones — and especially Kelli, my girlfriend is here helping me through this all. She’s got a hand in it for sure. So I feel like there’s a lot of love around, and it’s working."