Derby scenarios: Who needs big finish next weekend to get in? 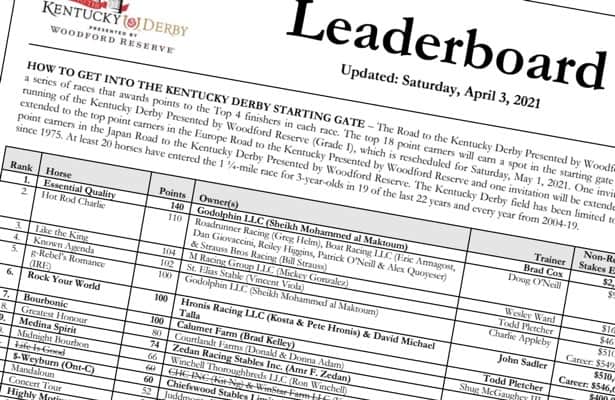 When hockey and soccer fans are consumed by late-season playoff scenarios, they know all about the “game in hand.” So should horseplayers.

The Arkansas Derby (G1) next weekend is the “game in hand” for horses such as Hozier who are trying to get into the Kentucky Derby. It is the one race that gives them a chance to go from being outsiders to getting an invitation.

“I think the distance is going to be good for him,” said Hozier’s trainer Bob Baffert, who also will have likely favorite Concert Tour in Saturday’s race at Oaklawn. “That’s the thing. At a mile-and-an-eighth that’s when the cream starts coming to the top.”

It is not just about the cream. It is about getting one of those 20 precious spots in the big Churchill Downs starting gate May 1.

With 40 points looking like the cut line for the second time in three years, 15 horses led by Blue Grass Stakes (G2) winner Essential Quality are safely above that. They include Concert Tour.

The other horses entered at Hot Springs next weekend will have that 100-40-20-10-point race as their “game in hand.” For them the task is simple: Finish in the top two in the Arkansas Derby to win a spot in the Kentucky Derby.

Hozier has a little more room for error. With 20 points, he needs a top-three finish at Oaklawn to make it to Churchill Downs. While a third-place result would take him right to the cut line of 40, the $100,000 that comes with it would put him in the clear if the earnings tiebreaker had to be applied.

Get Her Number (10 points), Caddo River (10), Super Stock (9), Roman Centurian (9) and Last Samurai (0) are among the Arkansas Derby possibilities that need a top-two finish to advance. Third place would do them no good.

Because of a low-energy workout Friday, Roman Centurian was scratched from Saturday’s Santa Anita Derby (G1). His trainer Simon Callaghan said “he seems well” and added Sunday he would probably be good to go next weekend at Arkansas.

The Lexington Stakes on Saturday at Keeneland is also a Derby qualifying race. But because it is worth only 20-8-4-2, it does not carry enough points to help the horses that were among the early possibilities to have that “game in hand.” That does not preclude 11th-hour entries from connections trying to top up a borderline Derby candidate.

There is still one wild card that could open the door for a horse to get off the bubble. Godolphin and trainer Charlie Appleby have not said publicly whether UAE Derby winner Rebel’s Romance (100 points) will claim the place he earned in the Churchill Downs gate. Appleby’s last pertinent comment was that “the Kentucky Derby will be a nice conversation to have over the next 10 days.” That was eight days ago.

For a horse such as Sainthood – and owners WinStar Farm and CHC Inc. and trainer Todd Pletcher – it is a case of hurry up and wait. He has 40 points, but he also has only $47,000 in earnings, putting him on the verge of being bumped into an also-eligible role for the Derby. Soup and Sandwich ($161,000), Dynamic One ($140,000) and Crowded Trade ($135,000) also have 40 points each, so they are also clinging to their places among the final five to get invitations.

The best news for all the 40-pointers would be to have Concert Tour finish first or second in the Arkansas Derby and for Hozier to finish out of the money. Then their connections could rest well knowing they would not be looking at their Louisville itineraries and fretting over cancellation fees for their bookings.

Oh, yes. There is attrition. The “thanks, but no thanks” to invitations. It already happened with overseas horsemen passing on automatic Derby berths through England and Japan. There is a report trainer Jimmy Jerkens will have Weyburn skip Kentucky and aim instead for the Belmont Stakes. That also could move the bubble.

If nothing else, the context of Derby talk the next few days will be a lot like Week 17 – or now Week 18 – of any given NFL season. Or for horseplayers, any given April.