Derby prep: Pappacap leads a field of 9 in the Lecomte 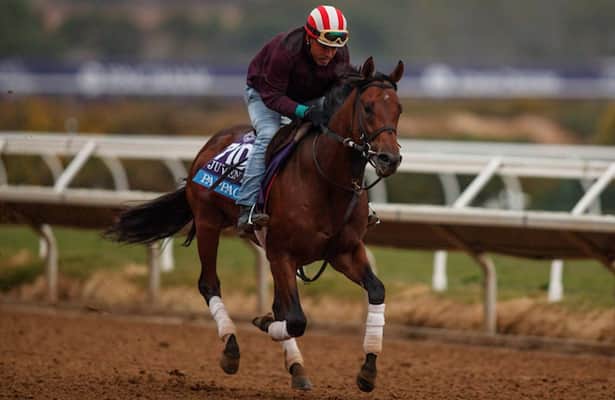 Pappacap, the Breeders' Cup Juvenile runner-up for Hall of Fame trainer Mark Casse, headlines a field of nine sophomores set to go postward in next Saturday's $200,000 Lecomte Stakes (G3) at Fair Grounds, a points-paying prep for the Kentucky Derby.

The Gun Runner colt currently sits atop the Kentucky Derby leaderboard with 12 qualifying points. In addition to earning four points in the Breeders' Cup, he previously tallied when second to Juvenile winner Corniche in the American Pharoah (G1) and fourth in the Del Mar Futurity (G1).

Pappacap drew post 3 and will have regular rider Joe Bravo in the irons.

Pappacap's chief rival figures to be Epicenter for trainer Steve Asmussen. After graduating at Churchill Downs in start No. 2 last November, the Not This Time Colt returned in the Dec. 26 Gun Runner at Fair Grounds and rolled to victory by 6 1/2 lengths.

Epicenter, who was piloted by Brian Hernandez Jr. in the Gun Runner, will be reunited with Eclipse Award finalist Joel Rosario, who was in the irons for his maiden win. They will break from post 5.

Asmussen also entered Presidential, who will be making his first start since graduating by 7 3/4 lengths at Indiana Grand back in August. Hernandez moves to this Pioneerof the Nile colt, who was a $625,000 auction purchase.

Also in with a pair is trainer Dallas Stewart. He has Surfer Dude, who was well beaten by Epicenter when third in the Gun Runner, and Unified Report. The Louisiana-bred Unified Report is a perfect 3-for-3 with a pair of state-bred stakes wins in tow. Corey Lanerie will be in the saddle.

Trainer Brad Cox entered Cyberknife, another Gun Runner colt who brought $400,000 at auction as a yearling. He was disqualified from a win in his debut, then just missed next time out against maidens, before breaking through to graduate at Fair Grounds when stretch to two turns.

Blue Kentucky for trainer Wayne Catalano is the most experienced in the field with six starts under his belt. The son of Include won an allowance race sprinting at Churchill Downs in November and came back to be third in the six-furlong Sugar Bowl at Fair Grounds on Dec. 27.

Rounding out the field are maiden winner Call Me Midnight for trainer Keith Desormeaux, who will be making his first since finishing off the board in last Novembers Kentucky Jockey Club (G2); and Trafalgar, who exits an allowance/optional claiming win at Fair Grounds on Dec. 2 for trainer Al Stall Jr.

The Lecomte is scheduled as the 14th and final race on the program. Scheduled post time is 7:20 p.m. EST.

*Rating is based on HRN fan votes, which rank the Top Active Horses in training.
Pappacap Lecomte Lecomte (2022)