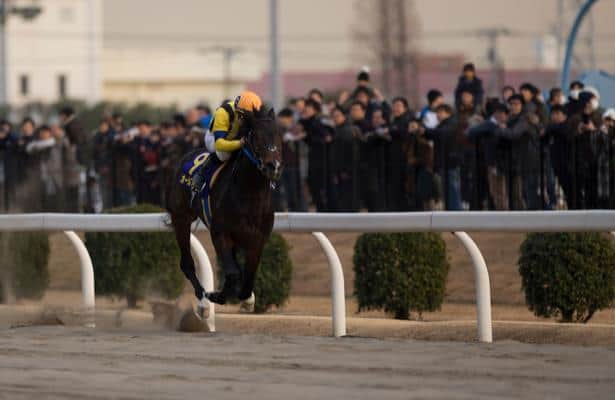 Ready for the next stage of the Japan Road to the Kentucky Derby? The four-race series continues on Wednesday with the Zen-Nippon Nisai Yushun (post time 6:10 a.m. EST), which – roughly translated – is the race for “the most talented 2-year-old racehorses in all of Japan.”

Held over 1,600 meters at Kawasaki Racecourse, a sandy bullring track measuring only 1,200 meters around, the Zen-Nippon Nisai Yushun earns its name by pitting two distinct groups of horses against each other. Racehorses in Japan compete in two divisions: the Japan Racing Association (JRA), which includes the biggest tracks and best horses, and the National Association of Racing (NAR), composed of lower-level dirt racing.

For the most part, JRA and NAR horses do not compete again each other, but they do intermingle in some high-profile races. The Zen-Nippon Nisai Yushun (a Group 1 on the NAR circuit) is such an occasion. The 2021 edition has drawn 14 horses, including five representing the JRA.

A son of U.S. Grade 1 winner Henny Hughes (best known as the sire of four-time Eclipse Award winner Beholder), Sekifu joins the Road to the Kentucky Derby in hot form. The chestnut colt took his time getting started; he finished sixth and third in his first two starts. But Sekifu since has won three straight races, including the Hyogo Junior Grand Prix (G2) sprinting 1,400 meters on the NAR circuit.

Sekifu has never run farther than 1,400 meters, so stretching out in distance for the Zen-Nippon Nisai Yushun is a question mark. But he is progressing in the right direction and clearly enjoys dirt, so Sekifu cannot be dismissed from contention.

Godolphin owns this promising bay colt, who brings a thoroughly American pedigree to the table. Combustion is a son of Grade 1 Cigar Mile (G1) Handicap winner Discreet Cat out of a mare by Grade 1 Forego winner Pyro, so he is clearly bred to handle dirt.

So far, Combustion is living up to his pedigree. After winning his first two starts over 1,400 meters on dirt, Combustion ran second behind Sekifu in the Hyogo Junior Grand Prix, beaten only a neck while gaining ground through the final 600 meters.

Combustion’s pedigree arguably leans toward speed a bit more than stamina, but if you like Sekifu, you have to give Combustion a look.

The most unpredictable of the JRA raiders might be Kaikano Kiseki. The brown filly is a daughter of Japan’s multiple Group 1-winning turf sprinter Kinshasa no Kiseki, and so far she has followed suit by competing exclusively in grass dashes.

Kaikano Kiseki has shown a productive level of form on the JRA circuit, winning her debut before placing second in the Hakodate Nisai (G3). But she’s never run farther than 1,200 meters and enters off a subpar fifth-place showing in the Fukushima Nisai, so she will need a form turnaround while switching to dirt if she is going to challenge in the Zen-Nippon Nisai Yushun.

The horse to beat in the Zen-Nippon Nisai Yushun might be Ice Giant, whose owner, Katsumi Yoshida, enjoyed resounding success with Japanese dirt star Gold Dream, a five-time Group 1 winner on the JRA and NAR circuits.

Only time will tell if Ice Giant is the next Gold Dream, but he certainly is off to a promising start. The son of Belmont Stakes runner-up Dunkirk is 2-for-2, breaking his maiden over 1,800 meters at Chukyo before finishing strongly to win the 1,800-meter JBC 2-Year-Old Yushun (G3) on the NAR circuit.

The fact that Ice Giant is proven over route distances is a major positive. Dam Ice Doll and dam sire Captain Steve (a Dubai World Cup (G1) winner) were likewise at their best running long on dirt, suggesting Ice Giant might be a Kentucky Derby type in the making.

Like Ice Giant, Dry Stout is undefeated in two starts. But sprinting has been his game so far, with a pace-tracking maiden win over 1,200 meters at Chukyo preceding a five-length allowance romp over 1,400 meters at Tokyo.

On the bright side, Dry Stout has tactical speed and finished fast in both of his victories, suggesting he has potential for stretching out in distance. This assumption is backed up by Dry Stout’s pedigree: Sire Sinister Minister won the 1 1/8-mile Blue Grass (G1), while dam Maxim Cafe is a daughter of Manhattan Cafe, a three-time Group 1 winner over distances from 2,500 meters to 3,200 meters. This makes Dry Stout a full brother to T O Keynes, who won the 1,800-meter Champions Cup (G1) over the Chukyo dirt earlier this month.

In short, Dry Stout has the makings of a top-notch racehorse, and he looms as a key threat to Ice Giant in the Zen-Nippon Nisai Yushun.