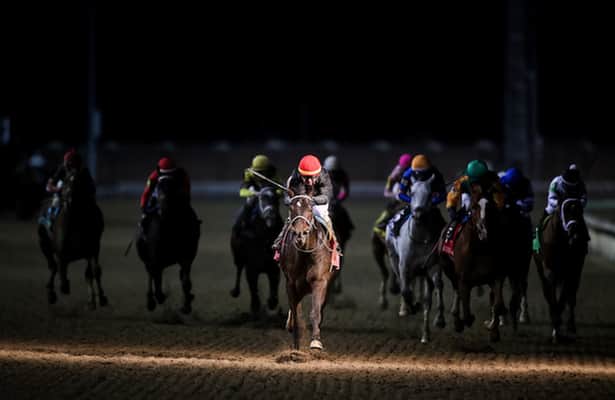 For the first time in 2022, the 3-year-olds on the Kentucky Derby trail will compete for their share of the increased qualifying points, with 50-20-10-5 on offer for the top four finishers.

Here is a full-field analysis for the Risen Star, with odds provided by the Horse Racing Nation staff. The Risen Star is carded as race 13 of 13 with post time scheduled for 6:58 p.m. EST.

1. Pappacap (6-1 – Gun Runner – Mark Casse / Tyler Gaffalione – 6: 2-2-1 - $596,000) Pappacap leads the Risen Star field in career earnings and in Derby qualifying points with 14, which for the most part came from a series of strong finishes in five graded stakes. He won the Best Pal (G2) in August but has not found the winner’s circle since. The 2-year-old champion Corniche beat him twice in Grade 1 races and then he was third in the Lecomte (G3) at Fair Grounds in his 2022 debut. Pappacap gets a rider change to Tyler Gaffalione, who is trainer Mark Casse’s go-to jockey. The nine-furlong distance should work to his favor. Use underneath.

3. Trafalgar (15-1 – Lord Nelson – Al Stall Jr. / Colby Hernandez – 4: 2-1-0 - $125,060) Trafalgar picked up 1 qualifying point when he was fourth in the Lecomte in his first race on Derby trail for trainer Al Stall Jr. In December, he won an allowance going two turns while pressing the pace, and that came after he used a late rally to get his maiden win at Churchill Downs. Trafalgar gets blinkers on, which is a positive move for the trainer. Speed figures and experience put this guy a notch below this strong Risen Star field. Toss.

4. Tawny Port (15-1 – Pioneerof the Nile – Brad Cox / Florent Geroux – 2: 2-0-0 - $75,600) Tawny Port brings a 2-for-2 record onto the Derby trail. Both of those wins were on the synthetic surface at Turfway Park going a mile with a late rally against large fields. As is the case with most Brad Cox runners, he was heavily bet in both starts. Speed figures came up very light from those Turfway wins. Cox moved him to train at Fair Grounds after his allowance victory. Toss.

5. Epicenter (9-2 – Not This Time – Steve Asmussen / Joel Rosario – 4: 2-1-0 - $170,639) This Steve Asmussen trainee has two excellent performances at Fair Grounds with a victory in the Gun Runner in December and then a second in the Lecomte, which got him 4 Derby points. In all four of his races, he was part of the early pace and he had the lead in the Lecomte until he got passed nearing the wire. Epicenter will have to carry his speed an extra half-furlong, but he should be expected to try to do so. Win contender.

6. Pioneer of Medina (12-1 – Pioneerof the Nile – Todd Pletcher/ Luis Saez – 4: 2-1-1 - $65,350) This Todd Pletcher runner won his last two starts, which should not be a surprise considering that the Hall of Fame trainer’s barn is red hot this winter as he sends horses to several tracks from his Palm Beach Downs base in Florida. Pioneer of Medina broke his maiden at Tampa in December then made a big step forward in speed figures when he won an allowance at Fair Grounds. He also prefers to use a pace-pressing running style. He will need to run even faster to contend for the win spot. Toss.

7. Zandon (4-1 – Upstart – Chad Brown / Jose Ortiz – 2: 1-1-0 - $99,500) Zandon is the only horse in the field to have run the nine-furlong distance of the Risen Star. He did that in his second start in the Remsen (G2) at Aqueduct when he took the worst of the rough-riding tactics of Irad Ortiz Jr. on Mo Donegal. He earned 4 Derby points from the Remsen when he was the favorite as he stretched out from a six-furlong maiden victory at Belmont Park. His speed figure from the Remsen is the co-high number in this field. Expect him to sit a stalking trip in here. Win contender.

8. Smile Happy (5-2 – Runhappy – Kenny McPeek / Corie Lanerie – 2: 2-0-0 - $284,810) Smile Happy is unbeaten in two starts with a pair of impressive two-turn victories from off the pace to his credit. He debuted at Keeneland in October and then won the Kentucky Jockey Club (G2) by more than three lengths to earn 10 Derby qualifying points. He beat White Abarrio and Classic Causeway in that race, and they both won recent Derby prep races. Smile Happy closed as the 8-1 favored individual betting choice in this past weekend’s Kentucky Derby Future Wager Pool 3. Top choice.

9. Bodock (20-1 – Street Boss – Brad Cox / Marcellino Pedroza Jr. – 2: 2-0-0 - $52,200) This is the third horse in the field that is unbeaten in two starts and the second one for Brad Cox. A homebred for Calumet Farm, Bodock has sprinted twice, breaking his maiden at Indiana Grand in November and taking an allowance at Fair Grounds on a sloppy track against a small field last month. The distance and Grade 2 company make this a massive step-up. Toss.

10. Slow Down Andy (4-1 – Nyquist – Doug O’Neill / Mario Gutierrez – 3: 2-1-0 - $249,850) Slow Down Andy looked good winning the Los Alamitos Futurity (G2) in December in his third start, when he picked up 10 Derby points. That victory was flattered when the second-place finisher Messier romped in the Robert B. Lewis (G3) by 15 lengths. Trainer Doug O’Neill chose the Risen Star for Slow Down Andy’s first start of the year because he wanted to give him experience shipping to a new track. He is only a half-length away from being unbeaten in three starts. Win contender.

SUMMARY: In the field of 10 for Risen Star (G2) only four horses have won a stakes race, and another missed doing so by just a head. To no surprise, those are the top five choices in the morning line.

Slow Down Andy and Smile Happy make their first start of the year after Grade 2 victories in which horses they defeated have come back to win impressively on the Derby trail in 2022. That gives those two a class edge over the others.

Epicenter raced successfully at Fair Grounds and finds a field without a lot of early speed, so he might have a pace advantage.

Zandon is the only horse in the field who has raced the 1 1/8-mile distance, and the long stretch run at the New Orleans track should be to his liking.

There is a strong case for four horses in the field to win, so a final betting decision in the Risen Star will depend on what the tote board says as post time approaches.

Breeders' Cup-bound War Like Goddess is a 12-furlong monster
Who is America's best turf horse? We may have seen...

Best Bet: With the Moonlight glows in Saratoga Oaks
Sunday’s seventh race from the Spa is the Grade 3,...

Nations Pride scores as the favorite in the Saratoga Derby
Godolphin’s Irish homebred Nations Pride made a st...
x