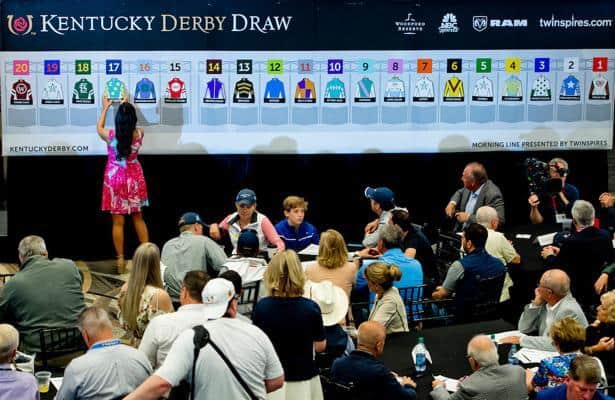 The Kentucky Derby is back on short rest! This year’s crop is quirky. The overall ability of these 3-year-olds has fluctuated, hindered first by Life is Good going to sidelines and then by several sluggish winning speed figures.

That said, it is a fantastic betting race. Essential Quality is a formidable favorite but it is not like he towers over this group on speed figures. Rock Your World, the best from the west, does not project to enjoy a free and clear lead like he had in the Santa Anita Derby. In fact, many of the horses coming in off wins have enjoyed soft trips. There should be plenty of value!

So how does this group shape-up from a morning line perspective? Let’s take a look…

First, the rules
The goal of the morning line is to give the public a reliable forecast on who the rest of their fellow horseplayers will bet on Derby Day. Morning line odds are both a handicapping and math problem but also a work of art.

I also like to have a clear second choice just in the case the morning line favorite should scratch. I rarely have made “co-second favorites.”

With the rules out of the way, let’s take a look at this year’s field…

Essential Quality is unquestionably the morning line favorite for this 146th Kentucky Derby. The 2-year-old champion is undefeated with improving speed figures and comes with a trainer that is well-known and supported at the windows. He has tactical speed, projects a good trip just off the pace and is firmly entrenched in the minds of everyone as the horse to beat. Let’s make him 3-1.

Second Choice: Rock Your World
Rock Your World is undefeated and figures to garner significant support. His Santa Anita Derby was impressive, and he earned a big figure to boot. The betting public loves to rally behind horses with pristine past performances such as his, especially when tactical speed is present. Finally, Joel Rosario is a popular Derby-winning jockey. Rock Your World feels like a logical second choice and 6-1 feels about right.

The Hard to Decipher Contenders
This next group of horses is the hardest to separate: Hot Rod Charlie, Highly Motivated, Known Agenda and Medina Spirit.

Let’s start with Known Agenda. This developing son of Curlin won the Florida Derby impressively, where he beat a strongly-backed Greatest Honour, and boasts a pattern Todd Pletcher used before to win the Derby. In addition to having the often over-bet Irad Ortiz, Jr., his running style is over-valued by the public in a race like the Derby.

But more so than these obvious merits, the other horses in this group collectively feel less likely to take action. Hot Rod Charlie won the Louisiana Derby but it is a prep that struggles to get much public support. Highly Motivated lost to Essential Quality. Medina Spirit lost to Rock Your World.

With all of this in mind, I decided to make Known Agenda the 8-1 third choice and put the others each at 10-1.

Once you get beyond the core group of contenders, things more naturally fall into place. Here are a few miscellaneous notes on some of the assignments…

- Mandaloun, at this point, seems to be the “buzz horse” or the runner everyone raves about from their morning appearance and works. The challenge is Mandaloun comes off a weak showing in the Louisiana Derby. I believe he’s a 20-1 horse in most circumstances but lowered him to 15-1 due to the buzz.

- Midnight Bourbon, I believe, is one of the most talented runners in the field but he did lose the Louisiana Derby to Hot Rod Charlie. So he has to be higher than Hot Rod Charlie’s 10-1. Steve Asmussen is a popular trainer and this son of Tiznow has looked fantastic during his morning preparations. I made him 15-1.

- O Besos was given rave reviews for his workout this week and has also received significant press coverage with his local connections. In my original draft I had O Besos listed at 30-1 but have lowered him to 20-1.

Here is the full field…