Derby Future Wager: Go with sure thing or 99-1 long shots? 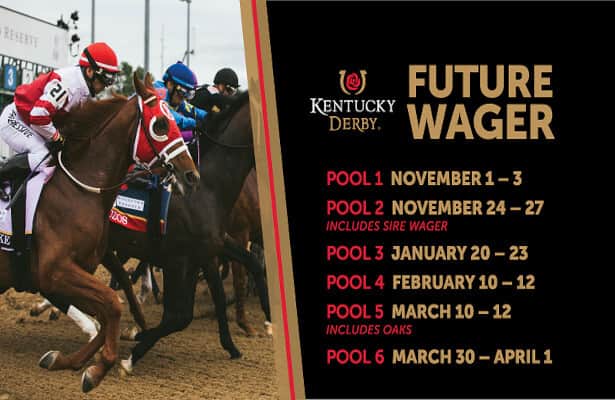 The second future wager pool closes Sunday for Kentucky Derby 2023. Now expanded to 40 betting options, the wager is more interesting than ever, offering better prices on both the mutuel field and the individual horses.

As of Sunday morning, 15 horses are at odds of 99-1 or higher, and the mutuel field is sitting at even money. So what's the best strategy for playing this pool? It depends mostly on which direction you want to go.

The sure thing – all other males

There aren't many sure things in horse racing, but if you bet the mutuel field (No. 40, all other 3-year-old males), you're basically assured of getting multiple horses in the Derby gate next year.  If we use this late-November pool as a yardstick, only six of the 22 individual horses listed last year made it into the Derby race: Classic Causeway, Epicenter, Mo Donegal, Smile Happy, Tiz the Bomb and Zandon.

It is also important to note that horses currently trained by Bob Baffert are not listed individually, so they are included in the No. 40, all other males. The chances of the all-others winning are increased by the Baffert horses.

Now, the immediate problem people recognize is that although there's a potential $1,000 profit there, there's also a big leak of likely six to eight horses who aren't covered with that bet. That being said, you still have $1,000 profit to work from, so you can bet a couple of the individual ones along the way and even hedge a couple on Derby day.

Another option is to bet just enough on the field to cover your future wager spending. Let's say you bet $100 on the field to get a bunch of Derby horses with a $200 return, you could take the other $100 and sprinkle that on big long shots you like. For fun, I might employ this strategy along with going after the big long shots.

The strategy I likely will take is just attacking a few long shots who I think have a chance to improve on the road to the Derby and become serious contenders.

The Kentucky Derby Future Wager website has free Brisnet past performances for all the 38 individual betting interests.

Litigate is trained by Todd Pletcher, and the son of Blame won his debut impressively a couple of weeks ago. He's a little under the radar since he only broke his maiden, but I liked the way he did it. And the even energy distribution of the Brisnet pace numbers (highlighted in yellow) indicate the colt should get longer distances.

The video below is teed up to his replay (he is No. 4), which was an impressive debut, where he is wide and never really fully driven by jockey Javier Castellano.

Tuskegee Airmen (currently 64-1) also is a little under the radar in that he broke his maiden at Parx and won a small stakes at Delaware Park. But note he is a son of Street Sense and trained by Kentucky Derby-winning trainer John Servis, who saddled Smarty Jones to take the 2004 Kentucky Derby.

This colt caught my eye when he won his debut impressively on Pennsylvania Derby day in September. He then returned to win a $100K stake at Delaware Park as the 1-2 favorite.

The replay is interesting in that he runs wide on the first turn and gets mid-pack position on a moderate pace, but then the announcer indicates that as the favorite he's spinning his wheels nearing the stretch. Then he easily overcomes the field and rolls on to victory. I'm a little undecided whether it was a great replay or a mediocre one, or perhaps his talent is definitely there but didn't show in the replay. Let me know what you think in the comments.

The other very interesting item on Tuskegee Airmen is that the New York Racing Association listed him as one of the probables for next week's Remsen Stakes (G2). So you could invest in a 64-1 unknown Derby contender today, but if he wins the Remsen he could instantly be a top five Derby contender a week later.

The other two who I was interested in include Mr. Ripple (99-1), an easy debut winner for Saffie Joseph Jr. at Gulfstream Park in October. He was listed as a probable for next week's Remsen as well, but it was reported Saturday that he has a fever and will miss the race. The other is maiden winner Cascais (99-1) for trainer Chad Brown. He is a son of Into Mischief who broke his maiden in his second start, going one mile at Aqueduct on Nov. 6.

For me, this is how I will play the future wager this time around:

$30 to win on Litigate and Tuskegee Airmen.

Good luck!  Be sure to check out the Future Wager website and take a look at the 38 individual future wager horses yourself.