Derby Alumni: $1 million Penn trifecta has rosy ring to it 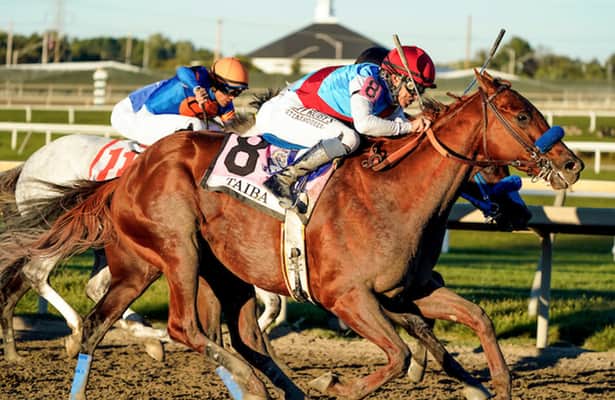 Four Kentucky Derby alumni contested the Pennyslvania Derby (G1) at Parx on Saturday, and the first three across the wire were familiar faces from the Run for the Roses. A close second behind Cyberknife in the Haskell (G1), Taiba turned the tables in an emphatic manner at Parx, tracking the pace and bounding clear to win by three lengths.

Zandon, far off the early pace, found his customary closing run and crossed the wire second. Cyberknife did not find the same kick but ran on well enough for third, another 3 3/4 lengths behind Zandon. Tawny Port, the only other Kentucky Derby entrant in the field, raced mid-pack early but faltered to a well-beaten 10th, 16 3/4 lengths adrift of Taiba.

Rattle N Roll, scratched from the Kentucky Derby, continues to shine on the circuit of Midwestern derbies. After victories in the American Derby and St. Louis Derby earlier in the year, he visited Remington Park for Saturday's Oklahoma Derby (G3). Bringing up the rear early, Rattle N Roll made a long, sustained run to win by a length and a half over King Ottoman.

Classic Causeway continued to hold his own in the turf division, setting the pace and keeping on for third behind Nations Pride in the Jockey Club Derby (G3) on Sept. 17. Ethereal Road returned to dirt on Saturday in the Bourbon Trail Stakes at Churchill Downs; he made a mild run in upper stretch but flattened out to fifth, 4 1/2 lengths behind Home Brew.

Mo Donegal, fifth in the Kentucky Derby before winning the Belmont Stakes, has been retired to stud. He had been out of training with a bone bruise, and his connections determined that he would not be able to make other major targets this year.

Two runners from the 2021 Kentucky Derby contested the Jockey Club Gold Cup (G1) on Sept. 3, though neither ran in the money. Keepmeinmind, off of a winning allowance return on July 22, was in tight early, chased mid-pack and chased on to finish a flat fifth, 7 3/4 lengths behind Olympiad. He finished half a length ahead of Dynamic One, who raced at the rear most of the way and passed only a pair of tiring horses.

Brooklyn Strong has yet to win this year but has finished third in four straight stakes races. That includes his most recent outing on Saturday at Parx in the 1 1/2-mile Greenwood Cup (G3). He stalked the pace set by wire-to-wire winner Ridin With Biden, and though he flattened out in the lane he still held third, nine lengths behind the pacesetter.

Mandaloun, who last ran fourth in the San Diego Handicap (G2), has been retired from racing. The son of top sire Into Mischief raced under the silks of Juddmonte, and will stand at their farm in Kentucky.

Among 2020 Kentucky Derby runners, Necker Island made a good closing run in the Louisville Thoroughbred Society Stakes at Churchill Downs on Sept. 17, a race in which he was sent off the second choice. He finished third but was beaten only a head for top honors behind Miles Ahead and Isolate.

Two others from the 2020 Kentucky Derby recently raced in non-stakes company. South Bend contested an allowance optional claimer at Churchill on Friday, going six and a half furlongs on dirt. Though he remains winless on the year, he rallied from last to get up for place 4 1/2 lengths behind Bango. Sole Volante tried the Tapeta at Gulfstream for a handicap on Saturday; sitting last early, he improved only mildly to finish fifth, 3 3/4 lengths behind Lamplighter Jack.

Storm the Court, most recently fourth in an allowance optional claiming race on Aug. 21, is expected to return Sunday in the Tokyo City Cup (G3). The 1 1/2-mile distance will be the longest of his career so far.

Among 2019 Kentucky Derby contenders, Tax stepped sharply up in class off of his return win in the Battery Park Stakes at Delaware, returning Sept. 3 in the Jockey Club Gold Cup. He set the early pace, but succumbed on the far turn and weakened to eighth and last, beatne 18 1/4 lengths.

Long Range Toddy contested the same 6 1/2-furlong allowance as South Bend on Friday. Tracking in range early, he flattened out of contention around the far turn and finished fifth beaten 9 1/4 lengths by Bango.

Gray Magician visited Arizona Downs for the first time on Sept. 19 for a 5 1/2-furlong allowance optional claimer. Midpack for much of the race, he finished with good interest, closing up ground in the final furlong. But he crossed the wire fourth, three quarters of a length behind winner Larry's Legend.