Derby Alumni: 9 horses back in action this weekend 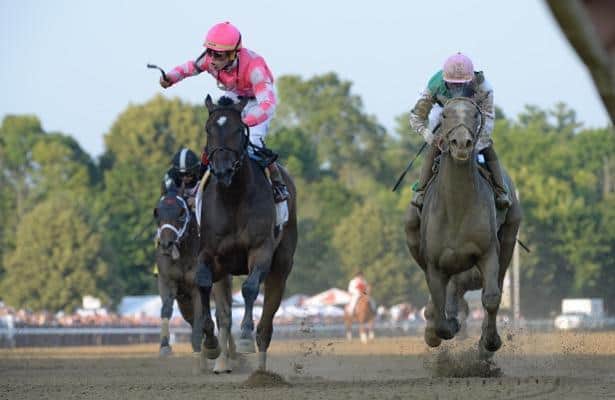 A pair of 2022 Kentucky Derby runners trained by Kenny McPeek will go for top-level glory on the turf Saturday in the Grade 1, $1 million Belmont Derby.

Tiz the Bomb, ninth in the Kentucky Derby, returns to grass for the first time since he ran second in the 2021 Breeders' Cup Juvenile Turf. His stablemate Classic Causeway, most recently finished third in the Ohio Derby (G3), tries the lawn for the first time.

McPeek also trains Rattle N Roll, who returned to action last Saturday in the American Derby (G3) at Churchill Downs, and posted a confident two-length victory over Kuchar. Rattle N Roll is cross-entered in the Indiana Derby (G3) and Iowa Derby on Saturday, though McPeek has stated that he will go in the former at Horseshoe Indianapolis.

Mo Donegal, fifth in the Kentucky Derby, bounced back with a win in the Belmont Stakes. He has been sidelined with bone bruising in his front fetlocks. He will be examined again in 60 days, with further plans outlined afterwards.

Hot Rod Charlie returned June 18 in the Salvator Mile (G3) for his first start since finishing second in the Dubai World Cup (G1). After a protracted battle with Mind Control, he crossed the wire second by a head. On July 2, Mandaloun made his first start since a ninth-place finish in the Saudi Cup (G1). Facing a strong field in the Stephen Foster Stakes (G2), he stalked the early pace but weakened in the lane to finish fourth, nine lengths behind Olympiad.

Dynamic One, 18th in the Kentucky Derby last year, has come into his own as a 4-year-old. The Todd Pletcher trainee most recently won the Blame Stakes at Churchill Downs on June 4, and hit the board in a pair of graded stakes before that. Dynamic One returns to graded stakes company Saturday in the Suburban Stakes (G2), where he has been tabbed the 7-5 morning-line favorite.

Helium, most recently second in an allowance optional claiming race May 22 at Woodbine, returns to dirt Saturday at Horseshoe Indianapolis for the Michael G. Schaefer Memorial Stakes. The Mark Casse trainee is the third choice on the morning line, behind Thomas Shelby and 2019 Kentucky Derby alumnus South Bend.

Brooklyn Strong returns to action Sunday at Belmont, as well. Most recently third in a $35,000 claiming race at Gulfstream Park, he steps back up in class for the Saginaw Stakes, where he will face five fellow New York-breds.

Max Player looked like a rising star in the handicap division after winning the 2021 Suburban Stakes (G2). Though he has been off the board in two starts this year, the Steve Asmussen trainee hopes to get back on track Saturday, when he will bid for a repeat in the Suburban.

South Bend, most recently fifth in an allowance optional claiming race on June 5 at Churchill Downs, also returns to the starting gate on Saturday. Trained by Bill Mott, he goes to Horseshoe Indianapolis for the Michael G. Schaefer Memorial Stakes, where he has been named the second choice on the morning line.

Tax, unraced since finishing tenth in the 2021 Pegasus World Cup (G1), has entered to make his first start since that race. The Danny Gargan trainee drew the rail for the Battery Park Stakes Saturday at Delaware Park. He was named the 3-1 morning-line second choice in the field of nine, behind only the inimitable 8-year-old Phat Man.