Departing to Shorten Up in Kelly's Landing 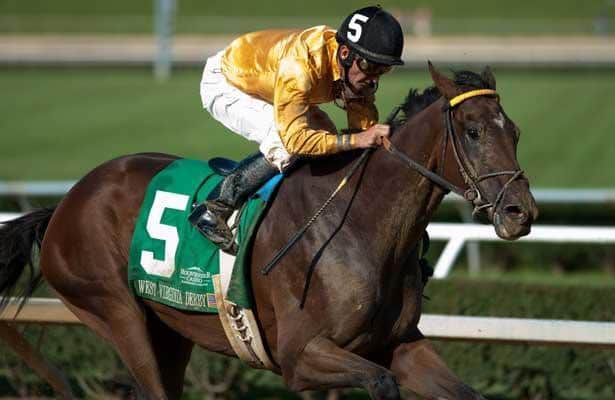 Claiborne Farm and Adele Dilschneider’s Departing is scheduled to start in the $70,000-added Kelly’s Landing overnight stakes, which is one of four stakes races scheduled for the June 27 “Downs After Dark” Spring Meet finale. Trainer Al Stall, Jr. believes that the 5-year-old gelding could potentially benefit from shortening up to the seven-furlong Kelly’s Landing distance.

“We haven’t been that happy with his finishes going long, so we are going to try shortening him up,” Stall said. “He’s always been very good and always trains well for me. We’ll see if this works or not, we’ll try it out.”

In other Stall barn news, Spendthrift Farm’s Medal Count is scheduled to make his 4-year-old debut in Saturday’s eighth race, an allowance/optional claiming event at 1 1/16 miles on the Matt Winn Turf Course.
“He’s coming into the race well; everything’s fine,” he said. “We’re just trying to get a race in him.”
With an 80-percent chance of thunderstorms in Saturday’s National Weather Service forecast, Stall said that Medal Count would still run if the race is taken off the turf.
UNBEATEN WILLOW HILLS READY FOR STAKES DEBUT IN SATURDAY’S ROXELANA
Donamire Farm’s Willow Hills looks to continue a perfect career inSaturday’s featured event at Churchill Downs, the $70,000-added Roxelana overnight stakes for fillies and mares.
The six-furlong Roxelana will mark the stakes debut for the homebred daughter of Distorted Humor, who is undefeated in three starts which include a maiden victory in March 2014 at Turfway Park and two wins this year against allowance company at Keeneland and Churchill, respectively.
Trainer Ben Colebrook spoke highly of the way his filly has been training going into the race.
“She’s been training great,” Colebrook said. “She’s doing about as good as you can hope for going into a race like this. She’s done better with each race and done nothing wrong so far. Her works leading up to this race have been super.”
Colebrook believes that the timing of the Roxelana is ideal Willow Hills, who made her last start on May 21.
“We’re just kind of dipping our toes in the water,” he said. “We nominated to some other races, but we thought that it would be best to take things one step at a time with her because she is so lightly raced. I think we’re better off just being cautious.”
If the Willow Hills runs a big race Saturday, there is a chance that her next start could be the $100,000 Groupie Doll (Grade III) (formerly known as the Gardenia Handicap) at Ellis Park on Aug. 8, a race that her dam, Pleasant Hill, won in 2007.
“If she wins, we’ll try to tackle something better,” Colebrook said. “I don’t think that a mile is out of reach for her. We may think about Saratoga, but I think it makes more sense to be conservative with her all summer. We’re taking our time with her.”
Jockey James Graham has the mount aboard Willow Hills on Saturday.
The field for the Roxelana, which goes as Race 10 of 11 on Saturday at 5:20 p.m. ET, from the rail out (with jockey and morning line odds): Pistolpackinpenny (Jon Court, 8-1); Milam (Corey Lanerie, 3-1); Chortle (Robby Albarado, 8-1);Donita’s Ruler (Francisco Torres, 4-1); Fioretti (Sophie Doyle, 12-1); Not Again Nancye (Aaron Court, 20-1); Toni’s Hollyday (Joe Rocco, Jr., 10-1); Willow Hills (James Graham, 2-1); and Tizzy Be Hot (Rafael Hernandez,12-1).
Colebrook also gave an update on his graded stakes-winning filly Sparkling Review, who triumphed in last year’s Mrs. Revere (GII). The daughter of Lemon Drop Kid was retired earlier this year after a well-beaten ninth in the Hillsborough (GIII) at Tampa Bay Downs, and was bred to Bernardini this season.
JOCKEY LEBRON RETURNS TO CHURCHILL DOWNS
Jockey Victor Lebron, who has won 19 races at Churchill Downs in sporadic appearances dating back to 2006, expects to return to the saddle next week at the Louisville racetrack after spending some time working with Horse Power Motor Sports, a car dealership that he opened last year in northern Kentucky and moved to Tampa, Fla.
:It’s been a while since I’ve been up here,” said Lebron, who was winless with four mounts at the 2014 Fall Meet and 1-for-25 during the 2014 September Meet after riding just one horse during last year’s Spring Meet. “Last year I skipped the Churchill meet. I went to Indiana and then went back to Tampa and did well. This year, I did great again at Tampa – can’t complain. Between doing that and taking a little break I am refreshed and ready to rock and roll.”
Lebron, a 30-year-old native of St. Croix, Virgin Islands, finished sixth in the Tampa Bay jockey standings with 33 wins from 227 mounts that earned $480,113.
Between riding and owning his car dealership, Lebron doesn’t fail to keep himself busy. Nevertheless, both jobs don’t overwhelm him much.
“The business takes care of itself,” he said. “I’ve got good people and good employees working for me. They’re trustworthy people and that’s why I’m okay because they can handle that for me and I can handle the horse racing.”
After riding the last week of the Spring Meet, Lebron will ride throughout the Ellis Park meet before returning to Churchill and Keeneland in the fall. Lebron will be represented by agent Nelson Arroyo.
“I rode the Tampa meet in the winter and when it closed I was taking care of dealership stuff,” Lebron said. “This is home for me so I decided to come back home and try to regain that Derby horse.”
Arroyo, who has won riding titles at Ellis Park, Indiana Grand and Turfway Park, is considering taking Lebron and his other jockey Abel Lezcano’s book to southern California for the winter, riding at Los Alamitos and Santa Anita.
"My plan will be to bring him and Abel to Santa Anita,” Arroyo said. “I would like to go to Los Al and from there try to get some business up there. I have good connections out there.”
BROTHERS TO BE INDUCTED INTO LOUISIANA SPORTS HALL OF FAME
Retired trainer and Louisville resident Frankie Brothers will be inducted into the Louisiana Sports Hall of Fame on Saturday, June 27. The New Orleans native saddled 2,359 winners from 10,440 starters and trained racing greats such as 1991 Preakness and Belmont winner Hansel, Pulpit, Madcap Escapade and First Samurai. He will be joining prominent athletes such as football players Jake Dellhomme, Kevin Faulk and basketball player Avery Johnson in this year’s induction.Other racing greats to be inducted into the Louisiana Sports Hall of Fame include jockeys Randy Romero, Eddie Delahoussaye and Craig Perret.
DOWN THE STRETCH

Barn Tour: Could one of these 9 be Barclay Tagg's next star?
Check out Barn Tours on Horse Racing Nation Doug O...