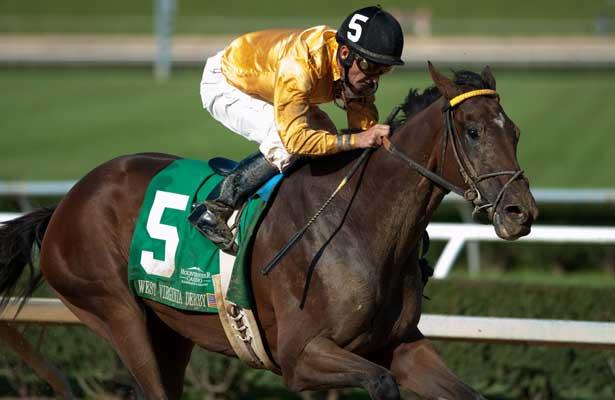 Seven sophomore colts and geldings will contest the $500,000 Grade 2 Super Derby at 1-1/8 miles Saturday at Harrah’s Louisiana Downs. Topping the field for the 34th running of the late summer staple will be Claiborne Farm and Adele Dilschneider’s two-time Derby winner, Departing. A winner of five of his seven lifetime starts, Departing drew the outside post at this morning’s post position draw.

A gelded son of War Front, Departing did not begin his career until the end of his juvenile season, winning a 6 furlong affair at Fair Grounds Race Course.  He has progressed tremendously in the ensuing 8 months and is considered to be one of the top three-year-olds in the nation. Five weeks ago, he was an 8 3/4-lengths winner of the Grade 2 West Virginia Derby at the Super Derby's 1 1/8-mile trip. The Al Stall, Jr.-trained horse has been installed as the even money morning line favorite and will be ridden by Robby Albarado.

Stall will be in search of his third Super Derby score in the past six years when he saddles Departing. Stall previously won with My Pal Charlie in 2008 and Apart in 2010. His best known runner, champion and Breeders’ Cup Classic winner, Blame, also ran in the Super Derby, finishing second to Regal Ransom in 2009.  If victorious, Stall would become the first trainer to win the Super Derby three times.

Shadwell Stable's improving Bashaar exits the Jim Dandy, a race in which he crossed the wire fourth behind the talented trio of Palace Malice, Will Take Charge, and Moreno. Trained by Dan Peitz, the late-running Street Cry colt finished a hard charging third in the Grade 3 Iowa Derby in his previous start. The dark bay will be ridden by Channing Hill, and is listed as the 7-2 second choice, breaking from the rail.

The Super Derby's traditional prep, the Prelude Stakes, produced a thrilling finish in which Carter Thoroughbreds and Joe Offolter’s Holiday Mischief edged favorite Sunbean by a head at odds 16-1. Trained by Joe Offolter, the son of Into Mischief earned his first stakes victory that afternoon. He has drawn the two-post with Cliff Berry, winner of the 2007 Super Derby aboard Going Ballistic, and is listed at 10-1 on the morning line.

Owners Gary and Mary West and trainer Wayne Catalano will send out a two-pronged attack in the Super Derby with Cameo Appearance (8-1) and Treasury Bill (10-1). The former, to be ridden by Patrick Valenzuela, is a lightly raced colt who exits a runner-up finish in the Straight Line at Arlington Park, his first try against stakes company.   Treasury Bill bids to rekindle his early season magic, as he had a brief stay on the Kentucky Derby trail that included a second-place finish in the Grade 2 San Vicente at Santa Anita.

The Super Derby has been the premier event at Louisiana Downs since its inception in 1980. Champion, and Belmont Stakes winner, Temperence Hill won that first edition and the $500,000 race has attracted an impressive list of top three-year-olds since. Included in the Super Derby roll call of winners are three colts who went on to earn Horse of the Year honors, Alysheba, Sunday Silence, and Tiznow. The Super Derby will be the centerpiece of a stakes-packed thirteen race card on Saturday that features six stakes races with more than $950,000 in total purses and a $100,000 guaranteed Pick 4 beginning on Race 8.