Dennis' Moment, back at work, aims for Pegasus World Cup 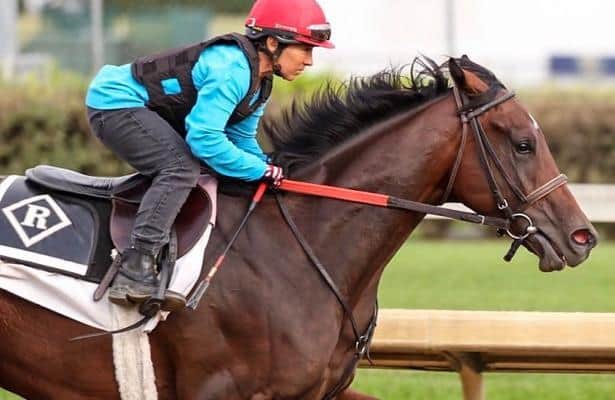 Dennis’ Moment, viewed as a sensational 2-year-old before his mighty stumble in the Breeders’ Cup Juvenile last November, has strung together three impressive workouts with an eye toward a possible start in the $3 million Pegasus World Cup (G1).

Trainer Dale Romans is so impressed by what he sees each morning that he said of the Tiznow colt, “I still think he’s the best 3-year-old in the country.”

Dennis’ Moment, owned by Albaugh Family Stables, will never have the opportunity to back up that boast. He added to the disappointment of his severe stumble out of the Juvenile starting gate by finishing last of 10 in the Feb. 29 Fountain of Youth at Gulfstream Park. He lagged 25 1/4 lengths behind victorious Ete Indien in his lone start this season.

“We elected to make the right decision, always take care of the horse first, and give him some time off. Hopefully, the bone bruising is gone now and he comes back and is the old Dennis,” Loutsch said.

The sophomore was given 90 days of rest and relaxation at Barry Berkelhammer’s Abracadabra Farms in Ocala, Fla., before beginning light training. He has stitched together three strong works since rejoining Romans at Churchill Downs.

He returned to the work tab on Sept. 26 with a crisp three-furlong drill in 36.80 seconds, best of five that morning. Then he blazed four furlongs a week later in a bullet 47 seconds before another four-furlong move in 48 seconds flat a week after that, 10th among 89 horses at the distance.

The trainer has every hope that the horse can still fulfill the enormous promise he displayed early in his career. Dennis’ Moment atoned for an inauspicious June 23 debut in which he clipped heels and unseated Robby Albarado with a whopping 19 1/4-length romp at seven furlongs on July 27 at Ellis Park. He set the stage for the highly anticipated Juvenile when he won the Sept. 14 Iroquois (G3) by 1 3/4 lengths and set a stakes record of 1:43.58 despite being geared down late in the 1 1/16-mile contest.

Loutsch will never forget the excitement as the minutes ticked off leading to the Juvenile. He recalled asking Romans, “Honestly, what do you think is going to happen here?”

The trainer could not have been more certain in his response. “We’re going to win by 10,” he told Loutsch. “I’ve never felt more confident in a horse.”

The Santa Anita gate snapped open … and it was over. Dennis’ Moment sank to his knees and Romans bolted from the box in which he and Loutsch were seated.

“He got up and just left,” Loutsch said. “It was over. You can’t go to your knees and recover from that.”

Indeed, there was no recovering from that. Dennis’ Moment came in last of eight, whipped by 21 1/4 lengths by 46-1 bomb Storm the Court.

“It was such a tough day,” Loutsch recalled. “You’ve got to go with the punches, and that was one of the low days. It’s hard to accept, but that’s just part of it.”

It was equally painful to abandon the Derby trail with the hope that Dennis’ Moment, a $400,000 yearling purchase named after family patriarch Dennis Albaugh, might rebound with a strong 4-year-old campaign.

Romans said of the decision to sideline Dennis’ Moment after the Fountain of Youth, “It’s certainly hard to do. But with a horse like this, he’ll come back and make up for it. He’s the real deal.”

Romans would like to get at least one start into him before the season ends. Much would have to go right to make the Pegasus on Jan. 23 at Gulfstream Park.

Loutsch said of a potential start there: “Absolutely, he’s that kind of horse. If he continues to feel good and go forward, there is no reason to think he can’t compete at that level.”