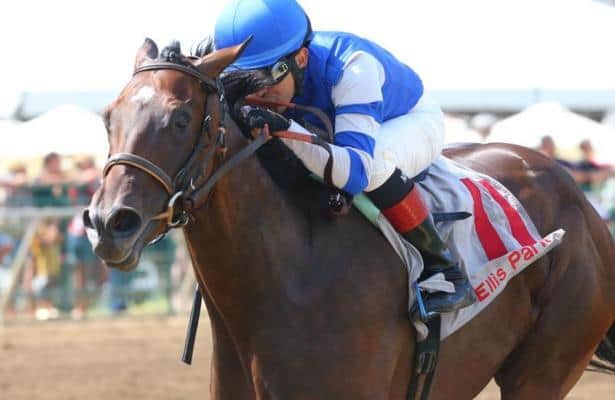 It is rare to see a chart comment as demonstrative as the one given to Dennis' Moment when breaking maiden. It said "demolished field," which sums up how dominant his 19 1/4-length victory was at Ellis Park.

After toying with his foes in the subsequent Iroquois (G3), Dennis' Moment was made the early favorite for the 2020 Kentucky Derby and was sent off the 4-5 favorite in what was supposed to be his coming-out party in the 2019 Breeders' Cup Juvenile.

The start of his disappointing year began at the starting gate that day at Santa Anita, as the speedy Tiznow colt stumbled and ran last all around the track.

Despite the poor effort, his valid excuse gave everyone in his camp optimism heading into the Fountain of Youth, but he ran last again as the favorite in the 10-horse field.

Nine months later he returns on Wednesday in the eighth at Churchill Downs, where he will look to prove that he is the same horse who was so visually impressive in his two wins.

He drew post No. 1 for this one-mile allowance test against nine other 3-year-olds and up.

The field includes Dean Martini, the 2020 Ohio Derby winner, whose form has tailed off recently; Telephone Talker, an improving 3-year-old for Mike Maker who has won two races in a row; and Mailman Money, who competed in the Risen Star and Louisiana Derby for Bret Calhoun earlier this year.

Though he is facing older foes and returning from a layoff, expectations are high. He has put together a slew of impressive workouts, including a five-furlong drill in 58.20 at Churchill Downs on Nov. 8.

That is high praise for a colt who has not won a race in over 14 months, but the ever-confident Romans has never wavered.

If Dennis' Moment produces the type of comeback effort that his connections expect, then he will reportedly target the Pegasus World Cup (G1) at Gulfstream Park for his next start.

Dennis' Moment may have missed the Triple Crown Trail, but there is still plenty of time for Dennis' Moment to redeem himself as a top class horse. That quest begins on Wednesday at 4:36 p.m.